Love is in the air for the Roosevelt Elk in Olympic National Park, meaning the the fall elk rut is upon us.  As the rain starts to fall and the leaves transition from green to orange, male elk, known as bulls, get quite excited.  During this time, male elk attempt to become the dominant elk in the region, hoping for their chance to win and mate with their harem. During the rut, the local elk will bugle as a mating call, which can also attract other males in the region to battle for dominance. Because of the aggressive, mating, bull elk, the Hoh Rainforest Campground in Olympic National Park will be closed until the end of October, 2015.

The Hoh Campground will close to overnight use beginning at 12:00 noon on Thursday, October 8 and will remain closed through Saturday, October 31, 2015. Several herds of Roosevelt elk reside in the Hoh Valley, with one frequenting the campground and visitor use areas.

With the elk’s annual mating season or ‘rut’ in process, male elk, known as ‘bulls’, are focused and intent on finding, attracting and defending their mates. Bulls use a variety of ways to establish dominance and win mates, and frequently charging and chasing each other and using their massive antlers for sparring. The herd currently using the campground area is accustomed to human presence and many of the animals have lost their natural fear of people, creating an increased risk to campers, particularly during the mating season.

The dominance displays of the rut, along with the bulls’ characteristic mating call or ‘bugle’ make for exciting wildlife viewing, but pose a threat for people who are in the vicinity.

While the Hoh Campground is closed during the month of October, visitors and hikers are still allowed in the region during the rut. Please be aware that the elk in the Hoh Rainforest of Olympic National Park are quite used to people, and will not run away if visitors get too close. Instead, the rules of National Park state that you are required to stay at least 50 yards (half the length of a football field) from park wildlife at all times.  Visitors to the incredibly popular Hoh Rainforest are urged to stay in their vehicles if elk are in or around parking areas. Do not test these animals. In National Parks around the nation, elk in the rut have attacked people and cars, causing serious injuries and damage. 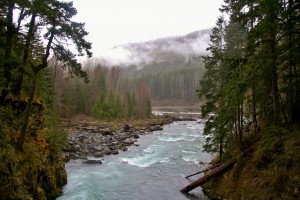 Next post Elwha River’s Whiskey Bend Road Closed to ALL Visitors, but…