The state of Oregon has many amazing and beautiful places, and yet, has just one National Park. Down in the south central Cascades, an ancient volcanic lake sits, waiting for your discovery. Widely recognized, yet rarely visited, Crater Lake National Park is a crown jewel in the National Park Service, offering visitors a wide variety of experiences, views and destinations within the park boundaries. Surrounded by beauty in every direction, visiting Crater Lake is an experience everyone should have, which is why I am encouraging a road trip this year.

In June of 2015, the Crater Lake Lodge, which precariously perches on the rim of Mount Mazama’s crater, turns 100 years old. Nearly torn down in 1980, the lodge was closed for 6 years as repairs were made. Now, the lodge is considered an architecture icon in the National Park System, offering one of the best views in the park. From the comfort of the rocking chairs on the back balcony, Crater Lake sits 1,000 feet below, surrounded by the crater rim and the peaks of the southern Oregon Cascades. Sure, it might cost a pretty penny to stay here, but even day visitors can enjoy the fire place, the views and the rustic ambiance. Plus, they have wifi.

The panoramas from around Crater Lake National Park are flabbergasting, drool-inducing, and soul-nourishing- if you enjoy this style of nature. With a circumference of 26 miles, the crater rim sits around 7,000 feet above sea level, dotted with a few peaks rising over 8,000 feet. To the north, views of the cascade range abound with the highlight being the sharp peak of Mount Thielsen. To the south, the flatlands around Klamath Falls are visible, as is Upper Klamath Lake shimmering in the distance. To the east, the eastern slopes of the cascades start to fall away, giving a peak at the desert lands of eastern Oregon, while the west shows off the green rolling hills leading to the Pacific. To say this place is beautiful is an understatement.

With so many impressive views all around, it is easy to overlook the park’s namesake. Crater Lake itself is insanely gorgeous, especially in the early mornings before the wind causes ripples on the surface. Crater Lake is the deepest lake in America, second deepest in North America and the ninth deepest lake in the world. At 1,946 feet in depth, the lake is 6 miles by five miles, giving it a near perfect circle look. What makes the lake so unique is that sits in an ancient volcanic crater, surrounded by huge exposed rock walls to every side. The only legal access to Crater Lake is from the Fleetwood Cove Trail, a steep mile long jaunt of switchbacks and impressive views. In the lake, two species of fish call the waters home. Last stocked in 1941, Crater Lake has a healthy population of Rainbow Trout and Kokanee Salmon. Along the shore, the fish are visible, though the drop off into the crater is easily seen mere feet from the rocky banks of the lake. Boat tours are available on Crater Lake during the summer months, taking visitors to Wizard Island for an amazing hike. The temperature of the lake fluctuate between 32F and 60F, and has has a clarity up to 143 feet, which is a world record. There are more than 5 trillion gallons of water in the lake, all from rainwater and melted snow.

Crater Lake National Park has two islands visible, though one is often overlooked due to its size and location. The largest and most prominent island on Crater Lake is Wizard Island, a long dormant volcano cone sticking out near the lodge. The island has hiking trails around it, circling the cone comically before reaching the top. From there, stunning views of the size and scale of Crater Lake becomes more apparent, especially when the boat slowly drifts away from shore. The other island in Crater Lake is Phantom Ship Island, named due to its slight resemblance to a ghost-like ship. Protruding from the water, Phantom Ship Island is a natural rock formation that is small is size and inaccessible to visitors.

The Sunrises and Sunsets

Because Crater Lake sits at such a high elevation with few mountains blocking the view in any direction, the sky during sunrises and sunset is one of the best places in the world. The first light of the day starts to the east, giving those staying in the Crater Lake Lodge a chance to see the first light of the day reflect over the still waters of the deep lake. If you watch sunrise from the eastern rim, unspoiled views await you, as the sun rises from a mere sliver into a blinding, warming glowing ball of light. Once the sun is up, enjoy the park and head to the west rim for sunset. Sunset at Crater Lake is an experience all in its own, a spiritual event that will forever be burned into your brain. With the sky over the lake turning all shapes of pink and purple, the color reflects off the lake and illuminates the nearby peaks in a hazy light red color. To the west, the warm ball of light plunges slowly over the rolling hills, posing perfectly between snarled tree branches, and seemingly resting on fir-lined peaks.

The closest big town to Crater Lake, or at least the one with the most visible light pollution is Klamath Falls, with a population of just 21,207. Because of this, and its level of isolation, Crater Lake is known world wide for being a stunning place to see the night sky. When no moon is visible, and the sky is cloud free, the universe unfolds over Crater Lake in a way that is beyond words. from the rim, the Milky Way Galaxy expands forever, letting stargazers drift away to the far corners of the universe, all from the comfort of their own seat. Bring a pair of binoculars, find a spot where car lights won’t flash at you, and sit back for one of the best night sky viewing locations in America. In the spring and early summer, bundle up and be ready for some serious mosquitoes.

Just 23 miles from the Crater Rim, the Union Creek Resort is home to Beckie’s Cafe. Beckie’s started serving food in 1926, and little has changed in the region since it opened. Unassuming and easy to pass, Beckie’s has become a must-stop destination thousands each year, each hoping to get a slice of some of the best pie in the world. Now, I know you have heard this before about other locations, but the pie, especially the mixed berry pie, at Beckie’s is worth the drive to Crater Lake alone. Stuffed with filling, thin on the crust, this pie makes for a great snack after a hike, or as an excuse to stop one last time before driving home. At $5 a slice, or $20 for a whole pie, everyone needs to stop here. It is so good, I always buy a whole pie to eat once I am back home.

7,700 years ago, the mountain we call Mount Mazama erupted. Over the course of a few days, the mountain and the landscape surrounding this once 12,000ft peak was forever changed.  The eruption was the largest eruption in what is now the US in the last 500,000 years, sending out 12 cubic miles of volcanic materials and chunks of mountain. Once the eruption subsided, the lack of lava below the mountain caused the hollowed out crater to collapse, leaving it the shape it is in today. The first non-native American to report seeing the lake was John Wesley Hillman in June of 1853, naming it the highly original name of “Deep Blue Lake.” After that, the lake was called Blue Lake and Lake Majesty before finally being known as Crater Lake. The first picture of Crater Lake was taken in 1874, and now the iconic lake can be seen on everything from mugs to keychains and everything  else sold in gift shops.

Crater Lake National Park has over 90 miles of trails, as well as giving access to the legendary Pacific Crest Trail. Cynics will say that most of the trails in Crater Lake lead to different views of the crater, which isn’t false. However, the views and experiences from each corner of the rim are unique and awesome, and the hikes are all worthwhile. The most popular hike is possibly Garfield Peak, a short (1.7 miles), but steep (886 feet gain) hike. Impressive panoramas await you if you have the fortitude to climb this peak. Another short, but steep hike is the Fleetwood Cove Trail to the shores of Crater Lake. This trail is easy, if taken slow with water breaks, but can give those who aren’t used to hiking a tough time. Down at the waters edge, fish can be seen and a boat ride to the Wizard Island Trail can be accessed. More hikes can be found at the Crater Lake Institute website.

Crater Lake National Park is kinda far from anywhere, which adds to the appeal of this amazing destination. Oregon’s only National Park is 233 miles from Portland, 398 miles from San Francisco and 447 miles from Yosemite National Park.  While I am sure those drives are great, I only know the route from the Seattle area, which is around 405 miles, depending on the route. The fastest way is to head down Interstate 5, but the scenic route along the Columbia River Gorge, past Smith Rock State Park, through the hip town of Bend, with a quick stop at the Newberry Volcanic Preserve makes the journey so much better. It is hard to describe this region of Oregon, but it should be seen by everyone, as it gives stunning views of Mount Hood, Mount Jefferson, the Sisters and many more peaks in Oregon. Passing through small towns and pine forests, Crater lake appears out of nowhere, making the drive less of a road trip, and more of an adventure into the unknown.

Buy your copy of the Seattle to Yellowstone: Road Trip! Guidebook, written by yours truly. If you love Washington, Idaho, Montana and Yellowstone, this book is not only a must have, it should be a requirement. Seriously, buy your copy today and start planning your trip to the World’s First National Park. You won’t regret it! 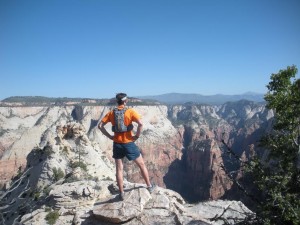 Next post Get To Know a Nature Athlete: Trail Runner and Climber Jason Henrie