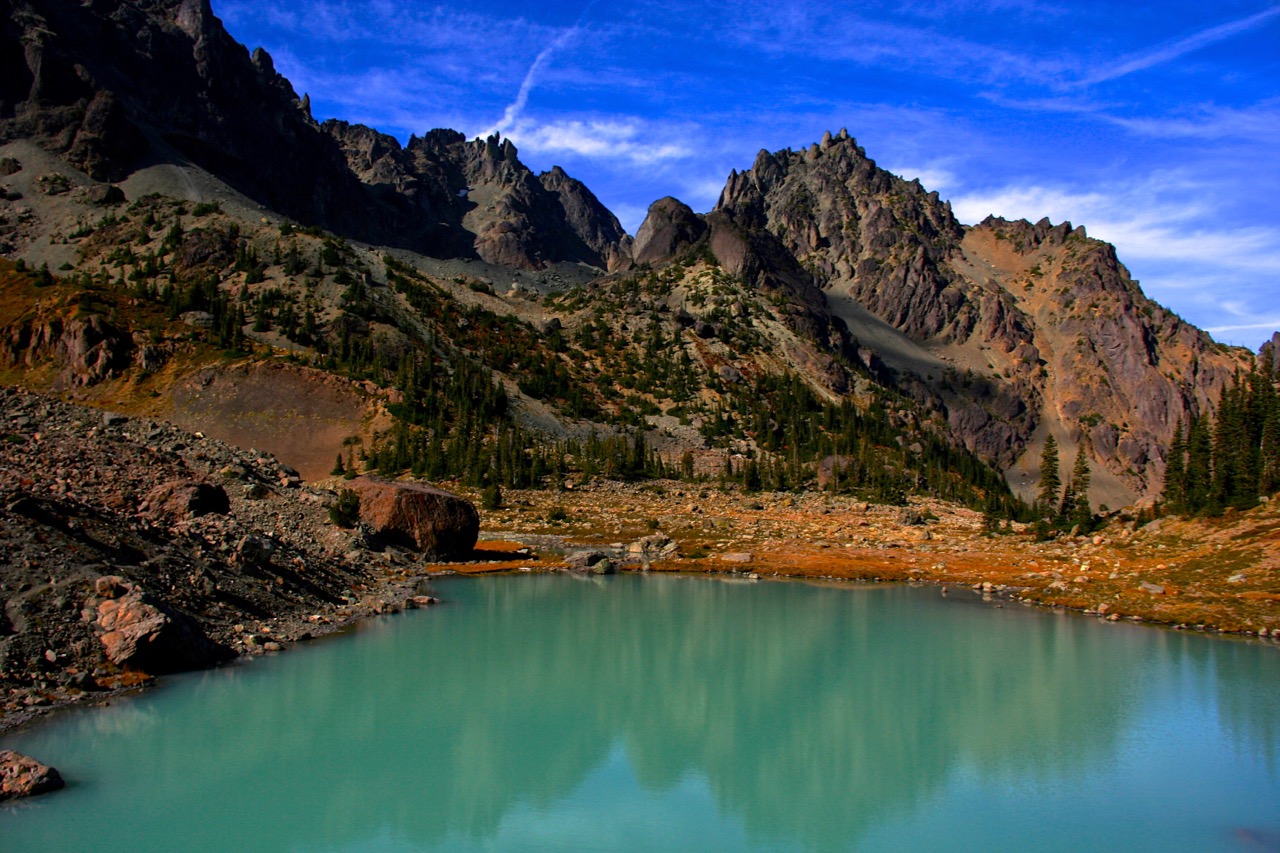 We all know the Olympic National Park is pretty much the greatest park to hike. With beaches on the wild Pacific Coast, thousands of rocky, high-alpine ridges that lead amazing panoramic views, and rainforests as green and dense as a lobotomized Kermit the Frog, Olympic National Park is home to some of the greatest trails in the country. Over 611 miles of trails weave through the various eco-systems of Olympic National Park, but one trail encompasses nearly all of them. Made even better by the brilliant colors of autumn, the trek up to Upper Royal Basin will leave you blown away by beauty.

Skipping only the coastal region’s beauty, the trail to Upper Royal Basin gets you from temperate forests to a rocky, glacier-filled alpine wonderland, full of deep blue tarns and crevasses in about eight miles one way. With three-thousand feet of elevation gain over those eight miles, the terrain changes often enough to reenergize nearly all day hikers.

The hike from the Dungeness River Trailhead to Upper Royal Basin can be quite long as a day hike, but for those looking to push themselves and experience nearly every type of terrain and ecosystem Olympic National Park has to offer. From high alpine lakes and glaciers with tarns to picturesque mossy forests next to cascading rivers and creeks, the hike to Upper Royal Basin has it all. Topped off with what is easily one of the prettiest and accessible backcountry waterfalls, the hiking around Royal Basin is sure to inspire you to hike even more in Olympic National Park.

The trailhead is out of the way; it takes three hours from Olympia and Seattle and an hour and a half from Port Angeles. To get here, you have to drive nearly 19 miles of dirt roads. Most people avoid this section of Olympic National Forest and National Park, especially for a day hike. However, skipping the northeast corner of Olympic National Park is unwise, as this trail makes Marmot Pass and other local favorites seem mundane.

Starting at the Dungeness River Trailhead near the Tubal Cain Mine trail, the first mile of the trail weaves along the always gorgeous Dungeness River. slowly working its way through large trees, the trail meanders next to tumbling cascades, babbling with the melt off from glaciers and the year’s snowfall.

Around the one mile mark, the trail splits, right before a small log bridge that crosses Royal Creek before it meets with the Dungeness. A small sign sits on a tree, pointing you in the proper direction.

A few minutes after the bridge, a trail darts uphill to the right. This leads to Mount Baldy. A few minutes passed that, you cross into Olympic National Park. The signs are near some of the best places to take pictures of the greens along Royal Creek. Once passed the signs, the trail slowly climbs through some of the most impressive, mossy scenery this side of a fairy tale. A deep green mossy carpet, lined with mushrooms in the fall, is bisected by the trail. Tall firs flank the brown path, which slowly and steadily gains elevation for nearly 2 miles.

Near three miles in, the trail starts to get more vertical, with the first steep switchback taking you out of your dreamlike trance that the mossy forest had placed you under. As you climb, you will cross a few (4 or 5) avalanche chutes that offer impressive views of the Royal Creek Valley below you and Gray Wolf Ridge above you. the further up you go, the more impressive the views are in the valley.

For the next three miles, continue to gain elevation and work to get through the trail, which rotates between forested areas, avalanche chutes and great views. As the trail becomes more manageable elevation wise, you will soon come across the Lower Meadow Campsites. The meadow, complete with stunning views, amazing little bridges and easy hiking is a great place to take a break, eat some lunch and get ready for the last push uphill before reaching Royal Lake.

Less than a mile above the Lower Meadow Campsites, the trail tops out and finally reaches Royal Lake. While not as picturesque as some of the other more remote lakes in Olympic, Royal Lake is pretty. Small, clear and stock full of fish, the lake is often still enough to get great reflections of Mount Clark and Mount Walkinshaw. The trail at the lake splits, but it is recommended you stick to the right to limit human impact on the fragile area. The trail follows the lake, passing numerous backcountry campsites, eventually leading to a giant boulder. Near the boulder, there is a trail sign directing you to a ranger station. Remember this junction on your return trip, as it also leads to one of the best backcountry waterfalls you will see.

From the boulder, follow the trail as it splits again, crossing over a small wooden bridge after a sign reading “Upper Basin.” This short trail heads uphill and can be quite tiring, but keep trekking along! After trekking uphill for a few minutes, the trail heads downhill toward a wide open valley of awesomeness. This isn’t the upper basin, but it is a great area in the summer and fall months for wildflowers and fall colors. Crossing the valley, the trail once again climbs, this time next to a small waterfall full of seasonal runoff from the Upper Royal Basin. As you trudge up the last hill, the trail once again levels off, depositing you into the gorgeous region. Take a good look behind you before you explore the basin, the view at your back is incredible.

Once in the Upper Royal Basin, take an hour or so and explore around. The best course of action is to head toward the largest mountain, which is Mount Deception, standing at 7,789 feet above sea level. There is a trail that you can follow, which eventually leads you to a deep blue pool, fed by melting glaciers and snow runoff. Follow the trail around the small lake until you reach the giant, flattop boulder. From here, you can either call it a day, or continue to the base of Mount Deception, where you have an opportunity to walk across crevasse filled glaciers while gazing at the second highest peak in the Olympic Mountain Range. Once you have had enough of exploring around the rocky, moon-like terrain, head back toward the giant boulder near Royal Lake and get ready to see an amazingly gorgeous waterfall.

Hiking past the seasonal ranger station, continue along the trail toward the sound of cascading water. As the trail gets less and less maintained, you will soon crest a small hill and come within view of Royal Basin Falls. This two-segment waterfall tumbles 61 feet down a rocky slope, branching out nearly 60 feet wide. Flanked with green moss and giving views of Mount Clark above, Royal Basin Falls is the perfect place to end your exploring before heading back to the trailhead.

As far as trails go, the hike up to Upper Royal Basin needs to be explored by everyone. While it can be broken into multiple days with the proper camping permit, the trail is best experienced as a day hike for those who can manage. There is no better feeling than returning to the parking lot knowing that you were just standing on a glacier after hiking through an amazing forest, next to a stunningly impressive waterfall and around a small, but pretty lake. Royal Basin needs to be hiked, and you need to do it. 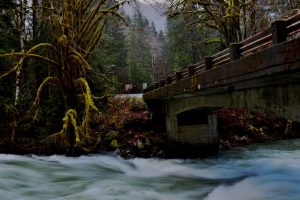 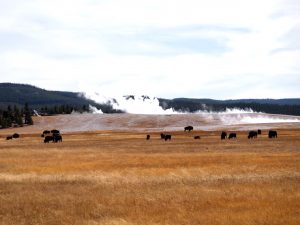