Residents of the Pacific Northwest will have a hard time forgetting the summer of 2015. We broke heat records, had intense fires and saw the sun more than we ever have in our corner of the country.  It was the year it didn’t rain, the year the lakes vanished and the year the rainforest of Olympic National Park caught on fire. For 170 days, a forest fire burnt the rainforest, but few saw any of the impact of the huge blaze. Today, with the release of new images of the Olympic Peninsula from NASA, we truly see the devastation to the immense section of wilderness that was on fire for half of 2015.

In late May of 2015, a rare thunderstorm moved above the Queets Rainforest. Sometime in the night, a flash of lighting jolted down, striking the forest floor below. Slowly smoldering the lightning strike say in one of the more desolate locales in Olympic National Park, slowly burning a log it had struck. The fire, known as the Paradise Fire, was spotted by plane during a flight on June 15th, 2015, by Olympic National Forest staff and reported to officials and first reported right here on The Outdoor Society. For over 170 days, the Paradise Fire in the Queets Rainforest of Olympic National Park smouldered, before finally becoming fully extinguished in late November. The fire scorched over four miles of pristine and remote rainforest, and became the largest fire in Olympic National Park history.

In a typical year, the Queets River Valley receives over 14 feet of rain each year, and yet, the fire kept burning clear into November of 2015. While the fire isn’t visible from the satellite images, it was still slowly burning a large swatch of pristine wilderness, far from the eyes of the world.  It is true that Olympic National Park’s Paradise Fire wasn’t huge compared to other devastating wildfires during the drought of 2015, and it didn’t destroy an entire river valley, yet the damp location of the Queets Rainforest made this fire quite impressive. The images above show the devastation to wilderness the fire caused, and the scale at which it was burning.  Over four square miles ( 2,796 acres) of pristine rainforest wilderness went up in smoke. In July, The Outdoor Society hiked to a ridge above the fire and reported what we saw in an article titled Watching the Olympic Rainforest Burn.

Now, with the help of NASA, we can see a unique view to Queets Rainforest of Olympic National Park, the location of the Paradise Fire. We can see how impressively huge it was and be reminded on the power and destructive force of wildfires in our most protected regions. The natural-color images located above were acquired by the Operational Land Imager (OLI) on Landsat 8 and share by Nasa. The older image was taken on February 22, 2015 and the second image was acquired on October 4, 2015. NASA released a statement and said that despite the great summer we had, the images shared were some of the few clear looks at the park in the past year. Not sure if I completely believe that, but still, these are awesome!

Thanks NASA, for these images. I hope you get more funding so we can continue to see the changes to our earth from miles above. 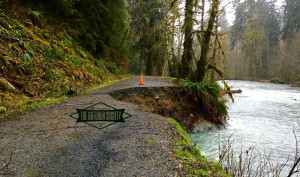 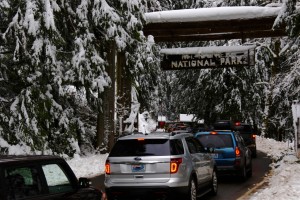