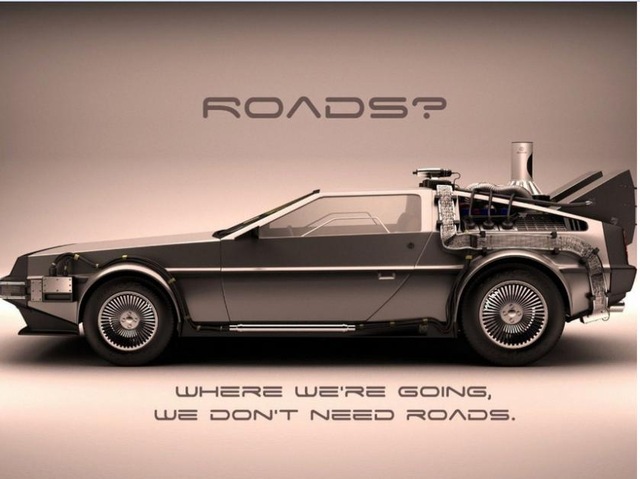 Back to the Future Day.

Honestly, I couldn’t be more excited to be alive on this date. Growing up, I loved the Back to the Future movies, as many of us did. Nearly everyone who has seen the trilogy looks at DeLoreans fondly, is a secret fan of the music of Huey Lewis and The News, and knows that where we are going, we don’t need roads. The movies have captured the imagination of generations, and many of us still love watching them to this day. While the main plot always seemed to be looking back, BTTF2 took us into the future, to late October, 2015.

There was always something amazing about the future scene in Back to the Future 2. When Marty McFly and Dr. Emmett “Doc” Brown arrived in the future, they were greeted with flying cars, a Cubs win of the World Series, another Jaws Movie, a love of Ronald Reagan and of course, hover boards. When this movie was released in 1989, I was 8 years old, and I figured this is what the future would actually be like. I spent the early 90s daydreaming about where my flying car would take me, and would rematch the movie in anticipation for the future. Sadly, as the years passed, and advances in technology came in other areas, I gave up the dream for having an affordable hover board or ever seeing a flying car. The movie captured my imagination, but reality never made those actually transpire, leaving me at a loss as to what to do when the actual date from the movie arrived. I had grandiose plans as a teen, but now that I am in my 30s, I am sitting in front of my laptop, working from home and wondering what has changed in the last 30 years.

While others are writing about more serious matters, I decided to take a look at how the city of Seattle, the State of Washington, the National Parks and even our sports teams have changed over the last three decades. If you love random data, this post is for you.

In 1985, the population of Washington State was just 4.4 million people, with Seattle’s population hovering around 500,000. Today, Seattle has an estimated 640,000 people living within the city limits, while the state of Washington now has over 7,000,000 residents. In contrast, California’s population grew from 26 million in 1985 to over 38 million today. If Marty and Doc were to have visited the Pacific Northwest in 1985 and in 2015, they would notice far less trees, more traffic, and a booming,m vibrant economy, with residents obsessed with the number 12. In 1985, the area was recovering from the economic slowdown of the late 1970s, and life was still pretty cheap out here in the Pacific Northwest. In 1985, those interested in higher equation could expect to pay between $3,000 and $5,000 a year top attend the University of Washington, while an average year of attending school at the UW in 2015 will cost just over $30,000. The degree means more today, right?

Speaking of sports… historically, the Seahawks and Mariners have always been terrible. Sure, we had a few good years here and there, but over the last 30 years, losing seasons are almost as predictable as rain. Year after year, sports fan endured mediocrity, rewarded with the 1995, 1997 and 2001 Mariners, as well as the 2005, 2013 and 2014 Seahawks. If Marty and Doc were Seattle area sports fans in 1985, as well as when they came to the future in 2015, they wouldn’t see much of a difference. Sure, the Seahawks an base is much larger and bandwagony, but the teams are basically unchanged statistically. In 1985, the Mariners finished 74-88, led by left fielder Phil Bradley’s .300 batting average and Mike Moore’s 17 win season with a 3.46 ERA. This team was not good. in 2015, the Mariners were 76-86, led by a .302 battling average by Nelson Cruz. Felix Hernandez was out pitching ace, with a 3.53 ERA. Another pretty bad year.

Across the street, the Seahawks 2015 season is looking a lot like the 1985 Hawks team that finished 8-8. On October 21st, 1985, the Seahawks were 4-3, having just lost an overtime heartbreaker to Denver. They would go on to lose five of their last nine. On October 21st, 2015, the Seahawks are 2-4 and could easily end of up with the same, or worse of a record. Unlike 1985, this team and fan base has experienced the top of success.

1985 was the driest year in Seattle from 1980 until 2014, getting just 25.13 inches of precipitation in this rain soaked city. 1996 was the wettest year on record for Seattle, when it received a staggering 50.67 inches of rain. Through the first half of October, 2015, the city of Seattle has gotten just 21.97 inches of rain, and could go down as one of the direst years on record. 2015 also saw more days over 70, 80 and 90 degrees than any other year in recorded history. Doc Brown would probably have something to say about Global Warming on this issue, and Marty would say that the dry weather, increased fires, severe droughts and melting glaciers were “heavy.”

Locally, our National Parks are doing basically the same as they were in 1985, especially since the budget hasn’t grown much since then. Attendance wise, Washington State’s National parks were pretty popular in 1985, just as they are in 2015.