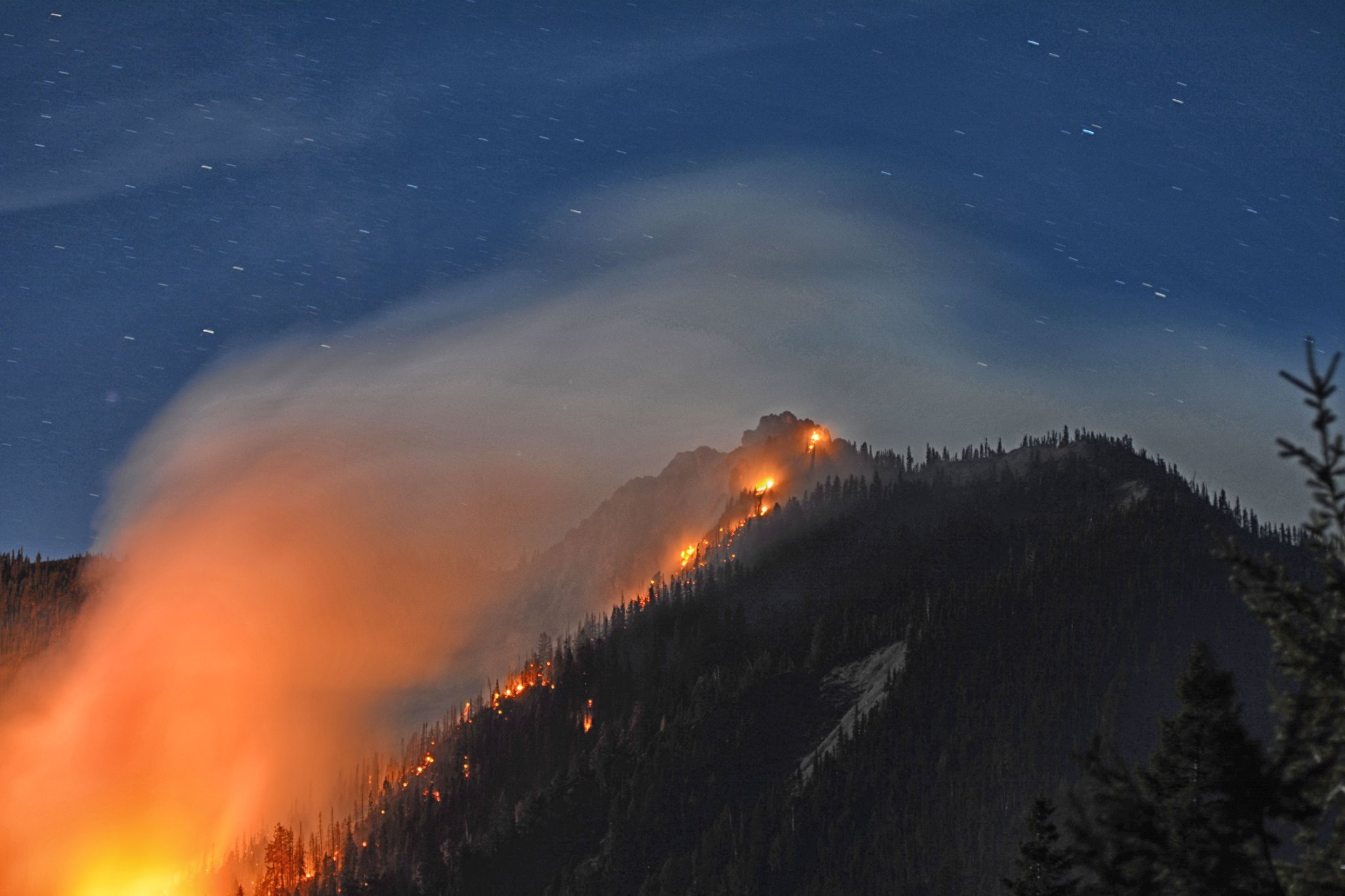 Maybe the fire will be blown out on August 25th, when the National Park celebrates the centennial birthday…

On July 21st, Olympic National Park was rocked by over 400 lighting strikes during a turbulent storm that swept over western Washington. Many will remember that storm through the countless pictures on social media over lightning over the Space Needle, but out in the wilderness of Olympic, the lasting impact of the lightening is still being seen and smelled. The lightning at the end of July started four fires in the wilderness of Olympic, all of which have slowly grown larger with the warmer weather that has smothered the Pacific Northwest. The fires in Olympic National Park have now burnt 315 acres, a number that will surely increase a bit after tonight’s flareups and the continuing warm weather.

The weather over the past few days in the Pacific Northwest is being described as warmer than normal. If you are a resident, I really don’t need to tell you it has been a quite ridiculous. Aside from that it seems like all of Western Washington was hotter than Eastern Washington today, real facts actually prove it. On Thursday, August 18th, the city of Forks was the warmest city in all of Western Washington. Nearby at the Quileute weather station, the temperature went from 79 degrees at 2:55pm to 95 degrees at 3:30pm. With no rain forecasted for the next week, the fires will continue to smolder, but at a slower pace thanks to cooler air coming into the region. With highs forecasted to be 15 to 20 degrees cooler, we should be seeing a lot less smoke and less dramatic fire pictures. Statewide, Washington is seeing burn bans in DNR and State Park land, with the National Forest Service and National Parks seeing many burning restrictions. For fires in your next vacation destination, check ahead and always follow the rules.

The four fires currently burning in Olympic National Park vary in size and location, with updated information available here. They are primarily burning root rot and beetle bug dead trees while keeping with the natural fires the region experiences. The largest fire currently burning is the Hayes fire, found 20 miles south of Port Angeles on a ridgeline between the Lost River and Hayes River. If you go to Hurricane Ridge, chances are you will see the smoke. It has consumed approximately 158 acres as of 7pm on August 19th. The fire is burning in an extremely remote area and is not impacting and will more than likely not impact your trip to Olympic National Park. While Olympic officials have closed the Hayden Pass trail due to the Hayes River fire, from Dose Meadows to the Elwha River, this will impact very few visitors to the park. Those with planned itineraries to this region should check with National Park officials before heading out.

The second largest fire is the Godkin Fire, which has burnt at least 102 acres. This fire is 25 miles south of Port Angeles along the Elwha River. Once again, smoke may be visible from this fire at Hurricane Ridge, but will not impact anyone’s trip to Olympic National Park at this time, though fire crews near the Godkin fire will be providing information about fire status to hikers along the Elwha River Trail.

The third fire is the Ignar Creek fire burning closer to the Quinault side of Olympic National Park. This fire was reported to have no smoke coming from it earlier today, but the warm temperatures may have changed that. The fire has only burnt 1/2 of an acre 22 miles NE of Lake Quinault.

Finally, we come to the Cox Valley Fire. This fire is the most visible and one of the more dramatic. Seen from the road leading to Hurricane Ridge in Olympic National Park, the Cox Valley fire has been putting on quite a display since it was started by lightning on July 21st. Having burnt 55 acres as of Friday evening, the fire has forced the closure of Obstruction Ridge Road twice due to heavy smoke. On Friday, fire crews began using water drops to limit the spread of the Cox Valley Fire. They successfully dropped two loads before the crews were forced to leave the region because an asshole decided to fly their drone over the fire. In a statement from the National Park Service, people are reminded of the following:

Aviation safety requires that wild-land fire air operations shut down immediately if drones are observed in the area. Drone launching is illegal within national parks, and drones are prohibited near wildfires. It puts firefighters at extreme risk.

What is the Fire Plan?

According to Olympic National Park officials, the plan of attack for the fires is quite simple. For three of the fires, they are going to be allowed to burn. All but the Cox Valley Fire have been mostly untouched. Since they are naturally-caused wilderness fires, they are being managed for resource benefits. Park officials tell us that as fires like this burn,they are creating a healthy mosaic of burned and unburned forest. Fire crews are consistently monitoring the fires and making sure they are not going to cause serious damage to building or threaten the well being of campers, hikers and of course, the fire crew. The Cox Valley Fire seems to be getting the most attention, due to the close proximity to popular tourist areas. I imagine, but can’t confirm, that fire crews will continue to try and suppress any more growth of the fire, as best they can. We will provide more updates when possible. Again, for the most updated, official info, please refer to: http://inciweb.nwcg.gov/incident/4906/ 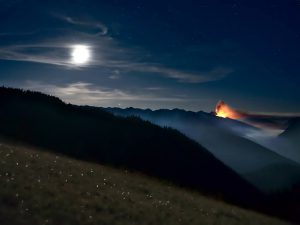