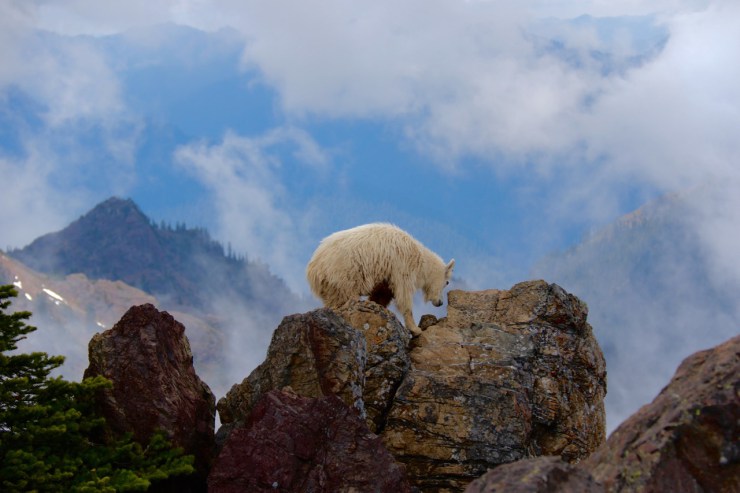 Scheduled to start during the summer of 2018, the mountain goats of the Olympic Peninsula will be removed. The aim here is to eradicate them for good, forever returning the mountain tops to the plants and animals that naturally roamed the region. The goats will be transported elsewhere, and then when that scheme runs out of money, they will be hunted. While many are upset about this, we all had a chance to have our voices heard on the issue. In 2017, after the NPS and NFS asked for public input, approximately 2,300 comments were received. On the 4th of May, the Park released it’s final management plan, which could be started in 30 days.

Mountain Goats are not native to the Olympics, instead introduced to Olympic on January 1st, 1925 by the United States Forest Service. On that day, 13years before Olympic National Park was created, the USFS released four mountain goats near Mount Storm King above Lake Crescent. The goats, from the Selkirk Mountains in Canada, were placed on Mount Storm King as an experiment to see how adaptable they would be to the rugged mountains of the Olympics. The goat’s ability to adapt, as well as reproduce, saw their numbers increase rapidly, making mountain goat sightings a frequent event on numerous peaks on the Olympic Peninsula.

The goats remained unchecked for around 75 years, when an unfortunate incident placed the Olympic mountain goats in the public eye. During this time period, the NPS was not pleased with mountain goats and floated numerous attempts to remove them. Nothing caught on until one fateful day in 2010, when a man was gored to death in Olympic National Park by a mountain goat.

A 2016 population survey of mountain goats in the Olympic Mountains showed that the population of mountain goats in the Olympics increased by an average of eight percent annually from 2004-2016. It has more than doubled since 2004 to about 625. According to park officials, the mountain goat population is expected to grow by another 100 in 2018 alone. Left unchecked, the population could be nearly 1,000 goats by 2023. While these number are great for the goats, they aren’t ideal for the region. Since they are invasive, their impact is huge on a landscape is not used to them. Native plants are said to be decreasing in the higher elevations and erosion, due to the goat traffic is said to be making a negative impact. On top, mountain goats are that native to the North Cascades Mountains, are struggling to grow in those areas. Both the USFS and the WDFW have long been interested in restoring mountain goats to these depleted areas.

WHAT IS THE PLAN?

The project to remove  the mountain goats from the Olympics is going to take awhile.

Over the next five years or so, the goal is to transport an around 700 goats to the North Cascades. Those remaining goats who evaded capture and relocation will meet a much worse fate- killed with shotguns or high-powered rifles by park officials or skilled volunteers. Those killed will be left to decompose, as long as they are away from popular areas for human, letting their bodies feed scavengers in the region. Soon, the only mountain goat you will find will be the rare bone or skull discovered on a remote peak.

The entire plan is said to cost the National Park Service around $200,000 to $250,000 a year, with the first year’s funding already taken care of.  The Washing Department of Fish and Wildlife has partnered with Olympic on the project, and told the Seattle Times that they expect costs to be about $350,000 for two years of moving goats.

Now, before you get upset about the removal of goats, it is important to remember that they are not native to the region and were brought in for hunting purposes back in the early 1900s. The goats from the Olympics that are scheduled to be moved to the North Cascades will hopefully help the goat population of that region, thanks to newer genes introduced from goats that have shown they can survive and grow in population. Hopefully, it works…

WHERE WILL YOU BE IMPACTED BY GOAT MANAGEMENT?

If you want to see a goat before they are transported or killed, head up to the areas mentioned below, as well as hiking to Lake of the Angels in Olympic National Park. Each area that has goats is also mentioned in my guidebook, 52 Olympic Peninsula Hikes.

This mountain goat removal project, once approved in June of 2018, will impact your hiking plans in and around Olympic National Park. Mountain goats in the Olympics are most commonly found at some of the region’s most popular trails. Because of this, the Park and National Forest Service will be closing three extremely popular areas for goat management this summer, and probably the next two summers as well. A simple rule of thumb for closures will probably be this: If you have seen a mountain goat there more than once, it will probably be closed at some time.

As of right now, there is a scheduled 2-week closure of Seven Lakes Basin in July, as well as a closure at the popular and family-friendly Hurricane Hill picnic area and trailhead, which will be used as a helipad site. There will also be a closure for the Upper Mt. Elinor trailhead for a helipad, and closures of the Mt. Ellinor and Mt.Skokomish area are rumored to be announced soon. There are said to be additional closures coming in September, too, and for the next 3 years. Hooray?? 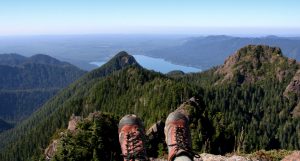 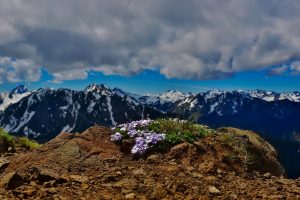