The Staircase region of Olympic National Park is full of surprises, be it the stunning mountain views at Flapjack Lakes and Gladys Divide, the serene sounds and sights along the Skokomish River, or the solitude and splendor of Wagonwheel Lake and Cub Peak. Up high in the Staircase region, mountain goats roam the rocky peaks, while the rare marmot tans itself on the exposed rocks in the sun. Down below in the Skokomish River Valley, elk and deer graze, while a few black bear and cougar hide from view. The Skokomish is magical, wild, and just one of the hundreds of fantastic places to experience Olympic. Yet, it holds even more secrets for those willing to hike a bit further, and climb a bit higher.  One such place is Black and White Lakes.

The history of the region is as old as time itself, wandered for millennia by the local tribes like the Skokomish. With the rivers and Hood Canal full of salmon, shrimp, oysters and more, the Skokomish River brought and sustained life. The region is special, and unlike anywhere else in the world, which is why it brought in settlers and explorers, hoping to start a new life out west, hoping to strike it big by setting up a timber mill, or a mine in the mountains. While the timber industry took off, and set up the communities that dot the Olympic Peninsula, the latter occupation failed to pan out, no pun intended.

Old mines are prevalent on the eastern slopes of the Olympic Mountains, their shafts long since abandoned and overgrown, while some have simply collapsed and closed up. It is actually hard to think of a region along the east Olympics where I haven’t seen a mine, but I digress. Mining was once quite popular, but overtime, the industry faded away. The Staircase region in Olympic National Park has numerous old mines along its trails, one of which is near two small lakes that offer one heck of an impressive view.

Black and White Lakes sit at 4,500 feet above sea level, and 3800 feet above the Staircase Ranger Station trailhead. To get here, hikers need to follow the trail to Flapjack Lakes, before following the signs to Black and White Lakes. They can be access by hiking directly uphill near Big Log along the Skokomish River Trail, but that is a 3,000 foot elevation gain in just over two miles. Be smart, take the “more gentle” route.

Black and White Lakes, for those curious, was named as such thanks to alcohol, a knife and a tree. The name comes from a brand of whiskey drank by early elk hunters in the region, and was beloved so much by one man, that he wandered off to the lake and carved the name of the whiskey into one of the high alpine trees. While I was unable to locate this carving, which I assume is long gone, the name remains. The name was so popular that it was also the name of a mine on Mount Gladys which was operational from 1907 until 1940. Today, Black and White Lakes are mostly unseen. They are visited, but only by a handful of backpackers, and even fewer day hikers who are looking for something incredible. They are a place of silent reflection, meditation, and serenity.

To get here, the trail is easy to follow, but is considered strenuous by all but the most insane hikers. Starting at the trailhead above the Ranger Station the first 3.5 miles are easy, following the old road that once skirted the banks of the North Fork of the Skokomish River. Enjoy this part, as it is the flattest trail you will see the rest of the day. At 3.5 miles, the trail reaches a fork, with the path leading to Flapjack Lakes, Gladys Divide, and Black and White Lakes well-marked.

From here, the trails head up, gaining around 2,000 feet over the next 3.5 miles. The steepest sections are the beginning and end, with the middle being downright pleasant and fun. Along this section of the hike, you will cross the Madeline Creek Bridge before eventually arriving at Donahue Creek Falls and the next intersection. About half a mile from the falls, the path splits again, this time with a sign telling you to head uphill to Flapjack Lakes, or across Donahue Creek to get to Black and White Lakes. This section of the trail is also steep, but after a mile or so, it gets a bit more level and starts to open up, finally giving panoramic views. As you near Black and White Lakes, your trail will merge with the trail that leads to Big Log along the Skokomish River. Head away from the valley below you (after you take in the view and climb to the top of one of the many rocky outcroppings) and head into the basin, soon spotting the larger of Black and White Lakes.

The larger of the two lakes appears to be nearly a quarter of a mile long, but just 75 feet or so across, expanding to larger pools at both ends to look like an hourglass. Campsites dot the lower side, giving access to a small creek and the lake. Above the ridge visible from the campsites is where the second lake is located. About a third the size of the larger lake, this lake is more shallow and offers even better views.

While views expand in all directions, there are two views near Black and White Lakes that everyone should see. The first is due east from the southern tip of the larger lake. Follow the ridge-line and fall in love with one of the most impressive views of the Skokomish River Valley you have ever seen. The second is south of the lake, up a smaller ridge. You only need to reach the crest of the ridge to see the mountains of the Sawtooth Ridge, with Flapjack Lakes below in the distance. Both are well worth the extra half mile of hiking you will do.

From Black and White Lakes, you can follow the trail further up, eventually reaching Smith Lake, you can return the way you came and maybe see Flapjack Lakes and Gladys Divide, or you can assault your knees and legs and complete the Black and White Lakes Loop by heading to Big Log. Please note that the trail is quite steep, dropping 3,500 feet in 2.3 miles, forcing fast hikers to slow down and avoid loose dirt, and exposed rocks and roots. 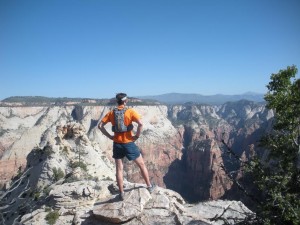