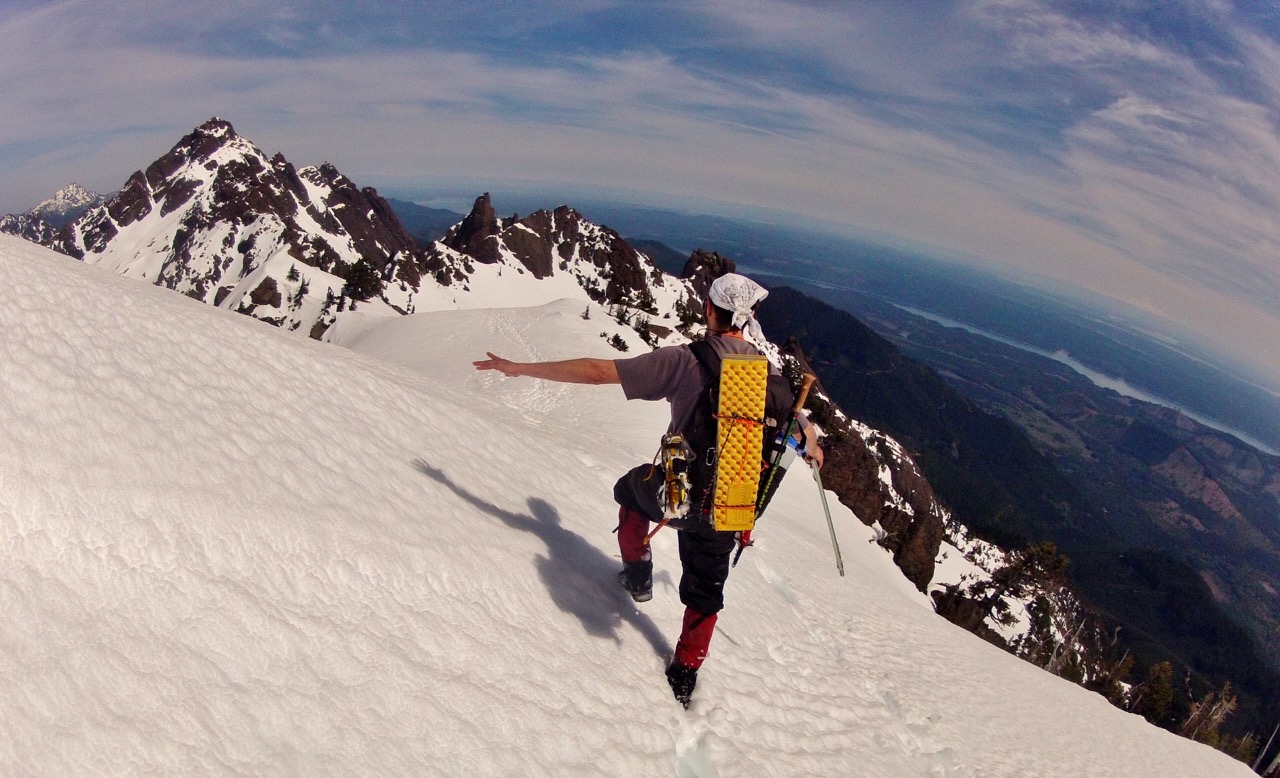 Despite extremely warm temperatures and sunny skies to end March and start April, the snowpack of the Olympic Mountains has barely changed. In fact, it appear that in the higher elevations, barely any snow had melted. Many of you will probably assume that the high temperatures put a nice dent in our snowpack, but the reality is that we have had an extremely wet and snowy winter. It will take more than four days of sun to start melting a significant amount of our above average amount. Serious snow melt-off didn’t happen last week, as I predicted. However, forecasts are calling for even warmer days in the next week, which could help double last week’s melt off.

This week, the weather looks to be amazing, despite a wet start to the week. The snow level in the Olympics will rise to 12,000ft by Thursday, and lowland temperatures will jump into the 80s! The snowpack will probably take a serous hit from Wednesday through Sunday, but I wouldn’t expect more than 10 inches to melt anywhere above 4500ft. The warm temperatures will also mean loose, wet and sloppy snow. Be aware that the afternoon hikes and climbs will get dangerous because of high creek crossings and messy snow that could trigger some nasty avalanches. Later this week, the main snowpack melt will likely occur below 4500ft, making high elevation hikes in the region extra tough, thanks to post-holing and general grossness of snow.

HOW DEEP IS THE SNOW RIGHT NOW?

Dungeness River Region
The snowpack locations in the rain shadow of the Olympics saw serious melt-off, which means trails like Mount Townsend could be likable without much gear in two weeks. Seven days ago, the Dungeness River Area snowpack site at 4,000ft was 160% of normal, with a depth of 19 inches. On April 4th, the snowpack is just 8 inches and 72% of normal. After this week’s heat, we could start finding a lot more snow-free patches in this area.

Quinault Mountains Region
Above the Enchanted Valley of the Quinault Rainforest, the Buckinghorse Snotel weather station rests on a ridge at 4,870ft above sea level. The snowpack in this region is currently at 131 inches, down from 143 inches just one week ago. This isn’t a huge jump, but does help highlight just how quickly we could see the snowpack start to vanish. Temperatures in this region will also be jumping up at the end of the week, meaning creek crossings in the area could be quite difficult.

Dosewallips Region
Along the Hood Canal, the Dosewallips region of the Olympic Mountains has seen an amazingly good year for snowpack. One week ago, the snowpack was 122% above normal with 90 inches. Today, the snowpack has melted 12 inches from that total, dropping to 78 inches. This amount is 117% of normal snowpack for the date. Now, before you rejoice about hitting up places like Upper Lena Lake and Lake of the Angels, keep in mind that the Snotel site I am getting this data from is located just below 4,000ft.

WHEN WILL THE SNOW MELT ON MY TRAIL?

Snowmelt is not an exact science, but what I have done, and will continue to do, is to monitor current melt speeds against the historic melt-off dates. Since my last post, where I predicted the melt-off dates, nothing has changed. I am still predicting that above 5,000ft, the snowpack will linger into June, with many areas seeing patches of snow into July. Places like Mount Ellinor, Hurricane Hill, Seven Lakes Basin and Lake of the Angels will more than likely have snow on the trail until the official start of summer. The heat is nice and lets us get outside after the wettest winter on record, but that doesn’t mean our favorite locations will be snow-free any time soon. Expect snow until June. If it melts faster, you know I will be the first one to share the news! Until then, go hike, explore and be safe!

Previous post Here Comes the Sun: Hikes to End the Gray Season in the Pacific Northwest

Next post My Favorite Pacific Northwest Trail is Too Crowded. Now What?