The National Park Service has an interesting relationship with technology. For years, the parks have been struggling to adapt and keep up to the fast moving tech boom. For most National Parks, things like Instagram accounts and Twitter pages are either rarely used or non-existent, with the majority of web content coming from the NPS websites, or their Facebook Pages. While most parks have to sit and await federal guidelines for posting on new formats, one National Park is not just ahead of the curve, but they are the trendsetters for all things technology. The park isn’t super popular, like Glacier, the “Great” Smokey Mountains, Yellowstone or the Grand Canyon; instead, it is tucked away in the northern Rockies, quickly losing the natural wonders for which it was named.

Glacier National Park had 2,366,056 visitors in 2015, with majority of them returning to the back to the park for a second, third or tenth time. Glacier National Park was named for the region’s glaciers. Today, the park has just 26 glaciers, down from 50 in 1968, and predicted to be gone by the 2020s, as told by this informative and visually pleasing page on the Glacier National Park Website. Famous for Lake McDonald, the Going-to-the-Sun Road, Grinnell Glacier and the Granite Peak Chalet, beauty and splendor at Glacier are hard to beat. The park has over 700 miles of trails to some incredible mountains, lakes and glaciers, and has a technology team that makes sure the world knows the park’s beauty.

The use of technology at Glacier National Park is incredible, with the park running an active and popular Twitter (41.4k followers in 2015 and 65.7k in 2016), Facebook(479k followers in 2015 and 540,499k in 2016), and Instagram (67.7k followers 2015 and 268k in 2016) account. The accounts aren’t stagnant either; the admins are active, engaged, humorous and educational, while still showing the beauty of this remote National Park. On June 11th, 2015, the park welcomed its 100 millionth visitor by sharing pictures on their accounts, as well as live streaming it as it happened, on the new app Periscope.

Periscope, for those who don’t already know, is a live streaming app that lets you broadcast yourself to the world. Live and unscripted, the early users of Periscope were trying to figure out its use, when out came Glacier National Park. Glacier started something new on Periscope, becoming the first ever live-streamed Ranger Q&A from the gorgeous Lake McDonald. It was that day I followed them, and have been enamored with the park enough to get an interview with the ranger who does it all, Ranger Bill Hayden, Interpretive Specialist at Glacier National Park.

How long have you worked in the park?

BH: I started here in last day of April in 1990. I got my first permanent NPS job at Independence National Historical Park. I was there for just over a year before I went to a few other parks. I came to Glacier because one of former supervisors at Teton was there and offered the job.

What is your highlight while working in Glacier National Park?

Ideally, it is still yet to come. In August 2003, we had a summer where there were lots of forest fires in the park. This one day, it had been chaos as always with forest fires. On this day, I was outside the park, at a friends house having dinner, when we looked up and saw huge plumes of smoke. We assumed it was another fire, but it turned out to be a new fire. Once we realized that, we got in car, drove to the foot of lake McDonald. Across the lake, the entire hillside had caught on fire. Ive never seen anything like that…it was a two mile wide, wall of flames…trees that were 80-100 ft in height were surrounded by flames that were three times higher. The sound was amazing. It sounded like the largest freight train in the world.

What parks have you worked at?

Seasonally, I worked in Grand Teton and the Everglades, prior to that, I was a concession employee in Yellowstone. In Yellowstone, I worked at Old Faithful, Lake, Fishing Bridge and Canyon, over seven summers. In the Tetons, I worked at Colter Bay.

How has your experience been with Periscope?

Fairly interesting. We are kind of limited in where we can do it. Glacier has limited cell phone and very few places with WIFI. Currently, it is being used at headquarters and at Apgar. Its been fun to use so far. People are really engaged by seeing live video in the park. Initially, we used an app called Meerkat, because a guy at the Department of Interior used it, but then he got word Periscope was coming out and thought everyone would like it better. So far it is much better. It has better integration with Twitter, and seems to be more popular. When I use Periscope, I can get 140-160 on a normal day, while I got seven on Meerkat.

What is your best moment on Periscope thus far?

In May, I was able to broadcast beaver, swimming under the bridge I was standing on. For everyone watching, I was able to get really clear view of a beaver swimming right below me. Those moments are serendipitous. Those are the magic parts of the park, and I was able to share it.

Have you had a worst moment on the App?

Social media is unrestricted, so you get all kinds of stuff. We did have a female ranger on, and inappropriate comments were directed at her during a Q&A. We ignored them and they stopped.

What is the Park’s goal with using Periscope?

The Park Service is still in the exploratory stages. Sometimes the Parks hold back on using this technology, usually awaiting orders from the National Office. With new apps and platforms, everything needs to be approved. As a whole, the parks are trying to come up with official policies that will benefit the parks in the best way possible. Glacier National Park has been very supportive of what we’ve done with our social media outlets.

What is the best way to Periscope?

What tends to work best is an informal question and answer period. In late May, I had my camera at Lake McDonald during sunset and was able to share alpenglow with everyone watching. Schedule talks are tough to do, because Periscope is like a drop-in program at the Park. It allows for an informal presence. So far, out longest one was 37 minutes, and I had about 240 people watching live, with 150 people watching the replay.

What would you change about the app if you had complete control over it?

I would allow it to go horizontal without having the questions go vertically. Search feature based on topics. Like if someone types Glacier National Park, find everyone periscoping from the region.

What other apps do you use that you consider ‘outdoor-worthy’

The park uses Instagram, there is an app that we are waiting to see if we can use Stellar. If you haven’t heard, Stellar is a great way to put pics and video together. If we could use it, we would do it in a way that electronically give people a wayside visitor experience.

What guidelines does do have in posting content on social media?

We have some guidelines, through a flow chart. Not terribly restrictive. Many parks have borrowed Glacier’s guidelines. Other parks have their own versions, but we try not to post pictures that link to professional photography sites, as it is viewed as advertising. Foul language or abusive content will be blocked or deleted. Every once in awhile, someone doesn’t get it. Debate internally on what people are allowed to say. We don’t want anyone censored, and differing opinions can be great. As long as they are respectful and not using abusive language, they are ok.

Periscope is content live in the moment – does that immediacy help with connecting people to the outdoors, vs. still photos, or longer edited movies?

It is just another social media tool. It is too soon to say if it is better than the others. The thing about Periscope that makes it is so different. We can put polished video up online, but Periscope is live, and there is not another way to do that. It captures the moment through an interaction that can be two ways, which isn’t an option on other platforms. It is also the new cool thing, and we will see if it lives or is it a flash in the pan. Some will once again argue it is “getting rid of moment of discovery” before you get to the Park. People were initially against webcams in the Park, but those have proven that people want to go places they have seen.

Regarding wifi and LTE coverage in the parks, do you personally think that it would be a good idea to expand that coverage and at what cost? Cell towers in the parks?

We have cell coverage on east and west side, and just this year the Glacier National Park Conservancy is putting WIFI at visitor centers. I think that is sufficient. You can leave that connection and experience the Park with out phone ringing. Technology around the Park would have benefits, but we aren’t there yet that it would outweigh the escape to nature. Yellowstone has more developed areas in the interior, able to hide a tower within that development, but we don’t really have that option. Even if we did, it is a Visual vs Philosophical argument. Do we want that in a park. Do people need to have cell phones in the backcountry? 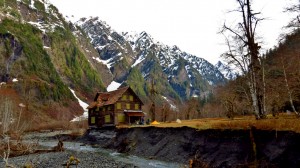