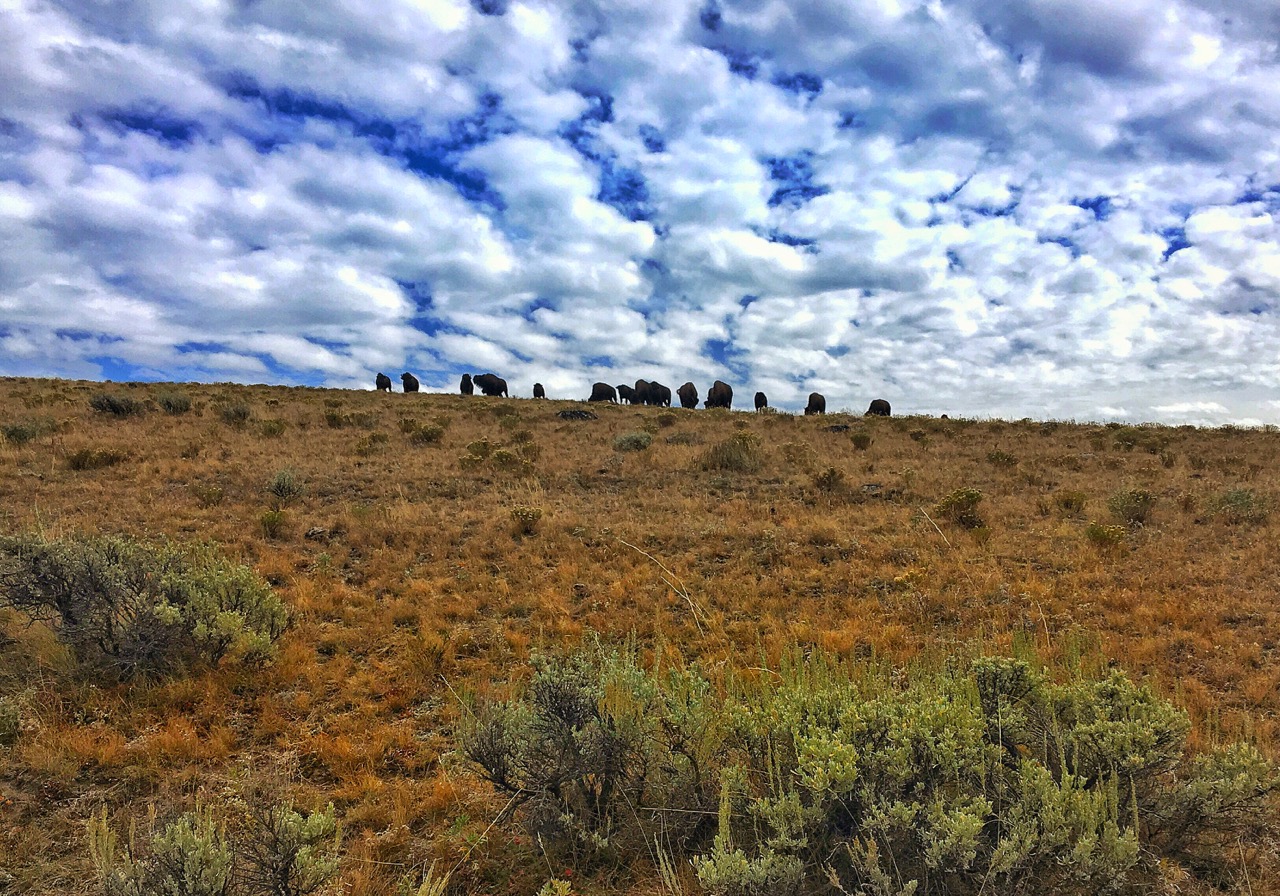 I was stuck in a rut. Pun intended. I had been running on city streets for too long and my body was craving new terrain. The constant pounding of pavement had me longing for a long, singletrack trail which would allow me to bask in wilderness for miles at a time. I needed a trail on public lands, and Yellowstone National Park had just the trail for me. Little did I know that my eight mile run would turn into one of the most special moments of my life.

I have always loved seeing bison. From my first trip to the park, when my family’s stuffed to the brim, brand new 1987 Ford Festiva got surrounded by a herd during the bison rut in Hayden Valley. I was six at the time, overwhelmed by the sheer amazingness of the park. We had just finished watching Old Faithful erupt a few hours earlier and were driving north toward Canyon when a herd of bison crossed the road in front of us. The herd split, with some cows and calves going behind the small, compact car. Apparently, the bull who was following the females was not pleased we had done this, and proceeded to grunt at my parents in the front seat. For what seemed liked minutes, the bison eyed the car, scratching the pavement with it’s hoof, as if to prepare himself to charge.

Bison have been known to ram into cars during the rut, but I was six and had no idea that this was even a possibility. The bull bison was nearly the size of the car. I should have been terrified. Instead, I watched in awe and excitement that I could have such an amazing experience with a wild animal. For the next 31 years of my life, this bison incident was one of the highlights in my Yellowstone experiences. That changed on a Friday afternoon in September when I decided to run part of the Specimen Ridge Trail, just north of the Yellowstone River. Had my six year old self known just how amazing life would get on this day, I would have wanted to grow up even faster.

Specimen Ridge is an iconic trail in Yellowstone, skirting the Yellowstone River before passing over a 10,000+ft mountain and dropping down into Lamar Valley. The whole trail is roughly 18 miles in length one way, gains 3,600 feet and requires a ford of the Lamar River. For my day, I would be running just four miles up the trail, turning around and running back. My expectations were low, as far as a day in Yellowstone goes. I knew I’d probably see some animals in the distance and enjoy sweeping views of the Yellowstone River, but I wasn’t anticipating any real excitement.

After delaying my run by chatting with fellow visitors at the Yellowstone River picnic area, I started the run, heading up a short, but steep hill to gain a ridge along the river. Through trees, I darted, dodging through the branches and roots as best I could while steadily climbing. Half a mile later, I was on the first of the days many ridges, looking at the geological wonderland of the Yellowstone River Canyon. The smell of sulfur wafted up from the banks below and I inhaled deeply, enjoying the odors of America’s first National Park. Sulfur in Yellowstone makes me immensely happy, reminding me of that first trip in 1987, when I wondered why the whole park smelled like rotten eggs.

For the next mile, I snaked my way along the canyon cliffs, rolling with the undulating hills and stopping to take far to many pictures. While many trail runners tend to plod along and enjoy the ever-changing scenery, I typically stop a handful of times during runs for the express purpose of snapping a few shots of the landscape expanding out before me. Across the Canyon, throngs of visitors explore the walkway at Calcite Springs, but I was all alone, striding alongside columns of basalt so perfectly symmetrical that I nearly questioned my atheism. Stupefied by nature’s splendor, I plodded onwards, reaching the largest climb of the day.

Gaining about 600 feet of elevation in the next half mile, I worked my way up the switchbacks, sweating and cursing with each step. After more time than I care to admit, I reached the crest of the hill and got to relax. My pace slowing as I worked my way across the rolling hills, enjoying the scenery and the thin, crisp air above 7,000ft. My mind, often plagued with stresses of life and worry, was blank, allowing me to be one with the elements and enjoy the carefree bliss of singletrack running. For another half mile, I bounded past sagebrush and deposited boulders from the days of glaciers, perfectly happy that this would be the highlight of my day. Then I heard a faint rumble.

Slowly, like someone tapping their fingers on a wooden table, the rumble started to increase in its intensity. What was initially no louder than the sound of thunder a few miles away grew in frequency, eventually becoming as loud as the obnoxious sound of a garbage can being wheeled out to the street past your open window. I stopped running, hoping to see what was the culprit when I noticed the ground was gently shaking, rumbling more and more with each passing second. For what felt like minutes, but was more like 10 seconds, I stood looking around, trying to figure out what was going on, unsure if an earthquake was occurring or if I was losing my mind.

Turns out it was neither. Looking slightly behind me, I caught glimpse of the source of the noise and shaking. Fifty yards away, cresting over a hill to the south, a small herd of bison was running in my general direction. The herd, numbering in the dozens, were heading east, just like me. Immediately I started running at an angle, making sure I gave them a wide berth to pass me. Once I was far enough from their route that I wasn’t in any danger, I jogged onwards, watching them gallop and run with such ease that I found myself growing envious. I was clipping along at an 10 minute mile pace and they were literally leaving me in the dust.

At their fastest, the herd was running at around 20 miles an hour, just over half of their maximum speed and didn’t look like they were putting forth any effort. As the first of the group passed me, each bison gave me a glance and kept moving. I was amazed to be seeing this and did my best to grab a few pictures and video with my iPhone and GoPro. As the last few bison, pulling up the back of the pack, made their way past me, the moment hit me. I had ran with a herd of bison. I had experienced wildlife in a park I know extremely well in a way I hadn’t ever imagined could be a reality.

I had ran with bison. In Yellowstone. Alone and in pure wilderness. I experienced an event that was timeless and amazing. Those few minutes running with the bison changed my entire outlook on my year of running, on my life’s direction and my perception of wildlife in the park.  Running Specimen Ridge with this small herd of bison replaced my childhood sense of wonder with bison that had occurred back in the 1980s. The thundering hooves, the snorts and the shaking; this all made me feel alive, unique and very blessed to experience public lands all year long.

I will probably never have a bison experience more special than this and I am okay with that. For me, the moment where I got to stride near an animal nearly wiped out by Manifest Destiny and racism, was greater than myself. It is an experience that transcends words and one that will be looked at fondly for the remained of my life. A dream came true, and for a brief few moments, I was part of a bison herd, roaming the wilds of Yellowstone, living life to the fullest.

Douglas Scott is an expert on all things Yellowstone, thanks to 30+ years of visits and employment in the region. With this knowledge, he has put together a wildlife watching guidebook to Yellowstone National Park, helping animal enthusiasts of all ages experience the incredible sights of the park.

Purchasing The Ultimate Wildlife Watching Guide for Yellowstone National Park is the perfect start to planning your Yellowstone adventure and is sure to get you excited for all the wildlife viewing potential. Preorder a copy today and get ready for a fall full of reading, day dreaming and planning your next adventure.

Previous post Where I Usually Introduce People to Public Lands 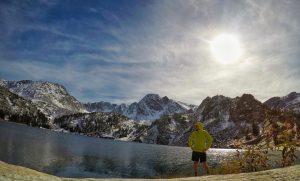 Next post Summer Vacations Were Meant For Public Lands