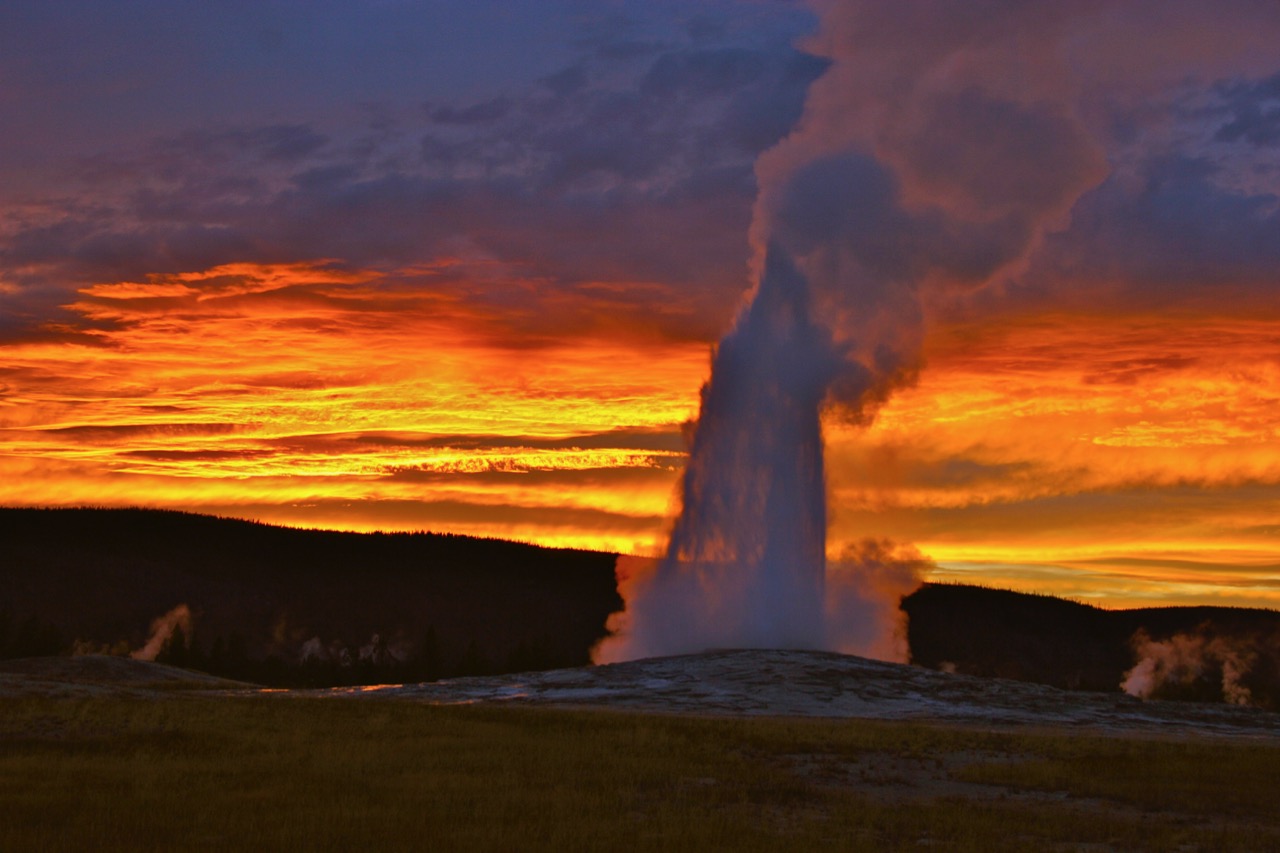 Seeing Old Faithful erupt in Yellowstone National Park is one of the quintessential moments in America’s National Parks. For generations, experiencing this iconic event has dazzled the crowds who visit all year long. While each eruption is special and unique, there are a few things that happen nearly every time Old Faithful goes off. In this post, we look at a dozen things you will hear while at Old Faithful if you watch it erupt from the boardwalk.

Before we dive into the sounds of the day, there are a few things that everyone should know about Old Faithful. Contrary to popular belief, Old Faithful’s eruptions are not 100% predictable. Old Faithful erupts every 68-94 minutes, shoots up to 184 feet in the air and lasts anywhere between one and five minutes in duration. Witnessing the geyser in action leaves the millions who visit the park each year in awe, but finding a spot to watch it along the boardwalk can be frustrating. Around Old Faithful, you’ll find a handful of stores, places to eat, an iconic lodge and dozens of trails to hike. Because of this, Old Faithful is one of the most popular places and can be a hard place to find calmness.

In the summer months with longer daylight hours, if you want to more easily find parking and a spot to watch the eruption, consider arriving before 9am or after 6:30pm. Also, make sure to pay attention to the direction of the wind. Old Faithful steams quite a lot and often, the steam can block your view of the water shooting skyward. When possible, be upwind of the geyser. If you’d rather avoid the masses for an eruption, head along the trails away from the boardwalk and watch it erupt from the Observation Point Trail. If you’d like an iconic place to watch it, head to the Old Faithful Lodge and make your way to the second story balcony. Arrive early to get a seat and sit back and relax.

Finally, if you can, we highly recommend catching it around sunset. Not only will the crowds be less, but seeing the erupting geyser in front of the colors of sunset will be a memory that will stick around forever. Now, onto the sounds of Old Faithful.

Families Discussing Where To Sit

Upon arriving at the boardwalk seating at Old Faithful, you’ll probably overhear families and groups of friends trying to figure out where to sit. Someone will get exasperated, people will hem and haw about where to go and occasionally, you’ll watch as people overthink their seating choices and end up missing out on a bench. If you have space by you, invite them to sit next to you and get to know them. Visitors to Yellowstone have incredible stories and may even have a few tips or recommendations on where to see wolves and bears!

Constant Questioning of What Time it Will Erupt

Despite the National Park’s best efforts to post updated signs of the estimated eruption time all around the boardwalk and in the buildings, many who come to Old Faithful will be asking when it is scheduled to erupt. That is largely due to the fact that once the eruption is within 30 minutes or so, people start to gather on the boardwalk. Those who are just arriving will assume it will happen at any moment, so they walk straight to the viewpoints, skipping the locations with the signs. As they wait, you’ll hear people asking when it will erupt. If you hear someone asking, let them know with a smile! We are all here for the same reason and you’d want the same.

People Saying They Are Bored

Old Faithful’s eruptions, while predictable, are not consistent or always on time. For those with who struggle uncertainty, the waiting can be excruciating. Meltdowns will happen and you’ll probably hear tears or a someone expressing their boredom and frustration at waiting. While it can be easy to judge, it is important to take yourself back to a time where you might have been impatient about something. If you can, strike up a conversation and get to know your neighbor. Soon enough the eruption will happen, leaving all in the area in awe. Just because someone may be frustrated doesn’t mean that the Old Faithful eruption won’t ignite a passion for public lands.

Languages From Around the World

Yellowstone National Park is a world renowned destination, bringing in people from around the globe. At Old Faithful, and the rest of the park, you’ll hear languages that you may not hear in your hometown. This is incredibly special, as here you are, in the middle of Wyoming, being part of a worldwide community for a hydrological event. While a few closed-minded people may be annoyed at people from other countries and cultures at Yellowstone, we celebrate this as an incredible event, basking in the sounds of excitement in dozens of languages.

Doubting Whether it Will Erupt

“Maybe this will be the time it doesn’t erupt,” is something that I can nearly guarantee you will hear as you wait for the eruption. It is usually said with humor and jest, as impatience and excitement builds. For those worried about a skipped eruption, do not worry. Old Faithful has been erupting roughly at the same interval since the eruptions were first documented over a century ago. If it does skip a full eruption, you’ll have witnessed one of the most rare events anyone has had in Yellowstone.

Before the major, real eruption of Old Faithful, the iconic geyser typically spurts water into the air a few feet for a couple of seconds and then stops, teasing and misleading the impatient crowds. This lasts just long enough to get the crowds worked up and start taking pictures. Then, it stops. About this time, those who are listening for it will hear the same joke murmured around the boardwalk and benches.

“Was that it?” or “Maybe this time it was a small eruption.”

Every so often, you’ll even see people stand up and leave after this pre-eruption. Little do they know that it will more than likely erupt for much longer and larger very soon.

Once the true eruption starts, the crowds rise to their feet for a better vantage point. The pre-eruption size is quickly dwarfed by the real event at Old Faithful, leaving the masses to say things like “wow” and “amazing” or any other number of impressed expressions. As the eruption continues, it gets higher and higher, exceeding expectations and blowing the minds of those who have never seen the geyser’s full glory. Those who visit Yellowstone often may be jaded at Old Faithful’s eruptions, but for most who see it, it is a breathtaking and jaw-dropping event that rightfully leaves people dumbfounded.

Because this may be the only time many visitors to Yellowstone see Old Faithful, you’ll overhear and witness people taking pictures. Parents will be telling their kids to pose, people will be holding their phones up to get a picture above the crowds and couples will be taking awkward selfies. Pictures are taken by people of all ages, not just the younger “kids,” so criticism of this is not needed or warranted. During this picture rush, it is entertaining to listen to those around you. Some will be shouting instructions for pictures, while others will be remarking about all the people focusing on pictures. One moment that stands out for me is from a few years ago, when a Mennonite family was seated in front of my group. The young son of the family, no more than seven years old, remarked that all of the people were looking at their phones and not watching the actual eruption. He had a great point. Definitely take your pictures, but also remember to take a few moments to stand back and enjoy the eruption. Be present. You’ll be amazed at how quickly a few minutes will fly by.

A Moment of Silence

The sheer power of Old Faithful has a humbling power. Because of this, during almost every eruption a moment of silence a moment of silence can be found. This is one of my favorite moments, as it shows that Old Faithful in person far exceeds the reputation. The silence shows a sense of awe and wonder by those watching. While it may not last the entire time, it is impressive to see that one of the world’s most famous geysers can steal leave people speechless.

The Sound of Old Faithful

As the water and steam blasts toward the sky, you may be able to hear the power of the eruption coming from the geyser. The roar is impossible to describe and is one that will stick with you for years after seeing the eruption. During the summer, it may a little harder to hear the full power of the geyser, but you can still hear it. Make sure to listen for it, as it is a unique part of the Old Faithful experience.

Once the eruption ends, those who remained through the entire eruption occasionally break into applause. This doesn’t happen all the time, but often enough that one shouldn’t be shocked when it occurs. The eruption is exciting and beautiful and for many, a once in a lifetime experience. Seeing it erupt with your own eyes is truly stunning and worth showing appreciation. If clapping does occur, join in, as it will make the memory that much stronger for all around.

Once the geyser returns to steaming and not spraying water toward the heavens, people begin a slow saunter, heading back toward the lodge and the stores around the Old Faithful complex. In the summer months, you’ll hear visitors discussing where to get ice cream and what flavors they want. The overheard conversations will more than likely entice you to do the same, as a cone of huckleberry ice cream on a hot summer day is hard to beat. In the cooler months, the ice cream talk is replaced with discussions of hot chocolate or coffee. Both are can’t miss experiences after the eruption. 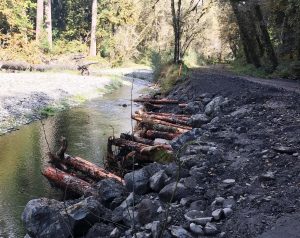 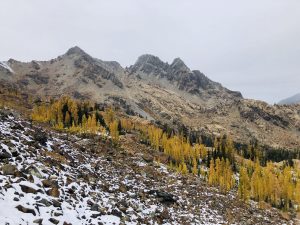 Next post Have You Been Stricken With Larch Madness?