This year has been a rough year for Yellowstone National Park and wildlife encounters. Last week, a man was attacked while running alone off trail, mauled, killed and eaten. The bear, a mother of two cubs, was executed by park officials, and her two cubs were sent to a zoo in Ohio. Signs all around the park warn of the dangers of approaching wildlife, and yet, people ignore all warnings. Since the year began, five tourists have been gored by bison, a record number and something we have been covering quite a bit. Park Rangers warn the masses entering the park, and each visitor is handed a bright yellow pamphlet to warm them of bison dangers… yet, people still continue to suck, as the picture below shows.

The picture was posted by the Instagram user @wyohighcountry, and the image was taken by @edraderphotography.

Now, I try to hold off on rants and swearing and all of that, but what the fucking hell was this guy thinking, and why were people not only watching him, but taking pictures instead of yelling at him to stop before he got this close. I hope that there were numerous people who witnessed the event that took down his license plate information so the Park Rangers can ticket this asshat, ban him and hopefully set an example of how stupid shit like this will be treated in National Parks and wild areas around the country/world.

Listen, I know my use of profanity may have angered someone, but sitting passively back is the reason why people like the man pictured above feel entitled to get so close to wildlife. Wildlife is indeed just that, wild. This is not a petting zoo, or a Disneyland exhibit. This is nature, and making the wrong decision can cost you your life. This is exactly how accidents happen, and events like these help embolden more people to make stupid decisions.

I can’t even begin to express my outrage, disappointment and sadness about the picture above. This needs to stop. 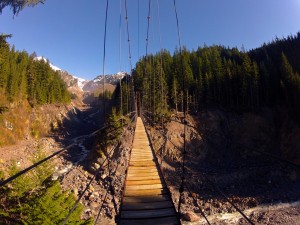 Previous post Half Acre of Glacier on Mount Rainier Breaks Off, Causing Closures and Flooding