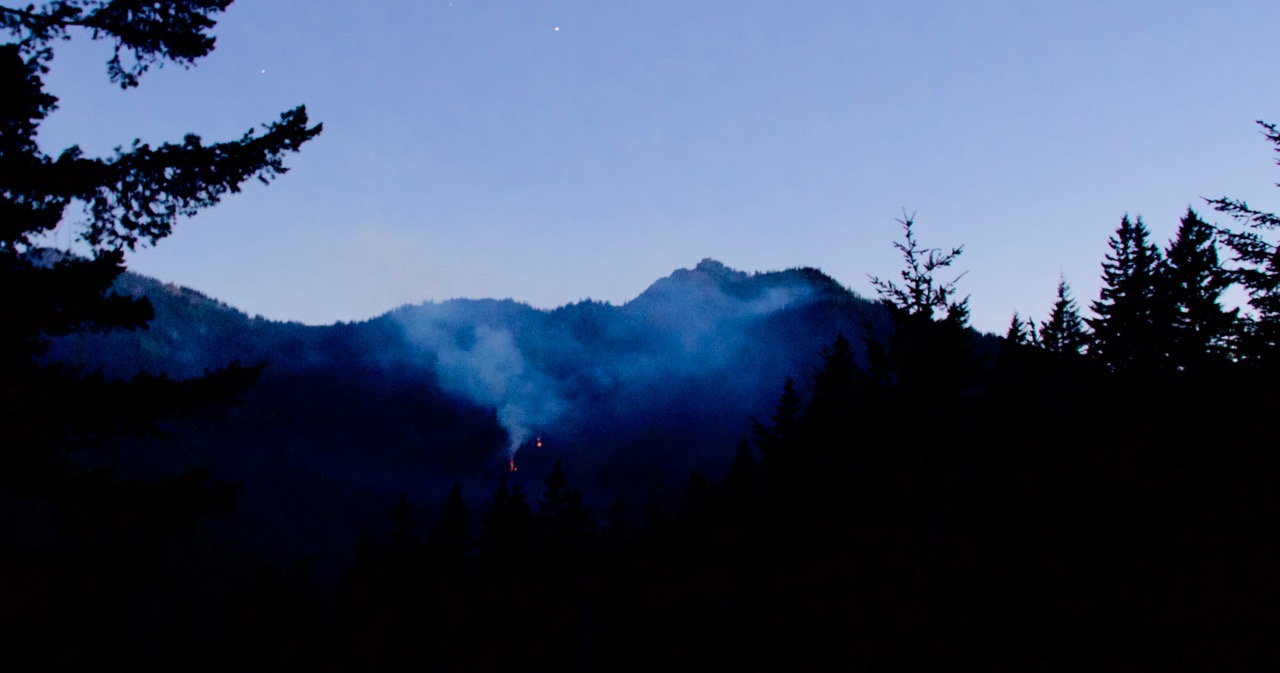 As a busy July winds down in Olympic National Park, four wildfire continue to burn in the wilderness of one of America’s favorite parks. Over 250 acres have been burnt due to fires started by lightning strikes in the park, ranging in size from 150 acres to just 1/2 acre in size. Three of the fires are burning in Olympic National Park’s north region, with smoke visible from Hurricane Ridge. One fire, the Cox Valley Fire, is burning across the valley from the road leading to the Hurricane Ridge Visitor Center. The fourth fire is burning in the Quinault region, 22 miles northeast of Lake Quinault. The fires have little impact on visitation to Olympic and visitors should not hesitate to explore the region.

On July 29th and 30th, The Outdoor Society travelled north to see the smoke and fires on the northern Olympic Peninsula firsthand. Along the road to Hurricane Ridge, the Cox Valley fire was billowing smoke at a steady rate, with burning trees easily seen. Up at the Hurricane Ridge visitor center, the Godkin fire was burning off in the distance above the Elwha River, with smoke  rising up from the wilderness. The fires have not had much of an impact on visitation to Olympic, though the Obstruction Point Road was closed over the weekend to allow fire crews better access to the Cox Valley Fire. Ranger programs and special events are not impacted by the fires and all hiking trails in the park remain open.

These forest fires are natural fires, stated by an amazing lightning storm earlier in the month, seeing 400 strikes in Olympic National Park. Thanks to a record wet winter and a mostly non-existent summer, these fires are not expected to do much damage to the park’s nearly one million acres of wilderness. The fires are predicted to have their growth significantly slowed this weekend and coming week, as warm temperatures decrease return and humidity rises. The weather will also help, as most weather models are also calling for precipitation to arrive early next week. The fires are being managed by an interagency team from the National Park Service, U.S. Forest Service, and U.S. Fish & Wildlife Service.  Fire Management will continue reconnaissance flight over the fires as needed to aid in planning fire operations for the next several days.

Quick Stats About the Four Fires from the NPS

Saturday brought cooler weather and increased humidity which led to decreased fire behavior. Minimal fire growth was reported on all fires. The acreage increase of Godkin and Hayes fires compared to yesterday is due to more accurate mapping. Three fire engines are assigned to monitor the Cox Valley fire and helicopter operations and water drops may continue if needed. The Hayes fire is progressing slowly over the ridge into Lost Creek. The Godkin fire is showing minimal growth to the south and west, up slope. Firefighters continue to monitor the Godkin and Hayes fires, taking management actions, such as point protection, as necessary. The Ignar Creek fire is smoldering and creeping, showing minimal fire growth.

We will continue to provide relevant updates on these fires if necessary. Images and news can also be found here.