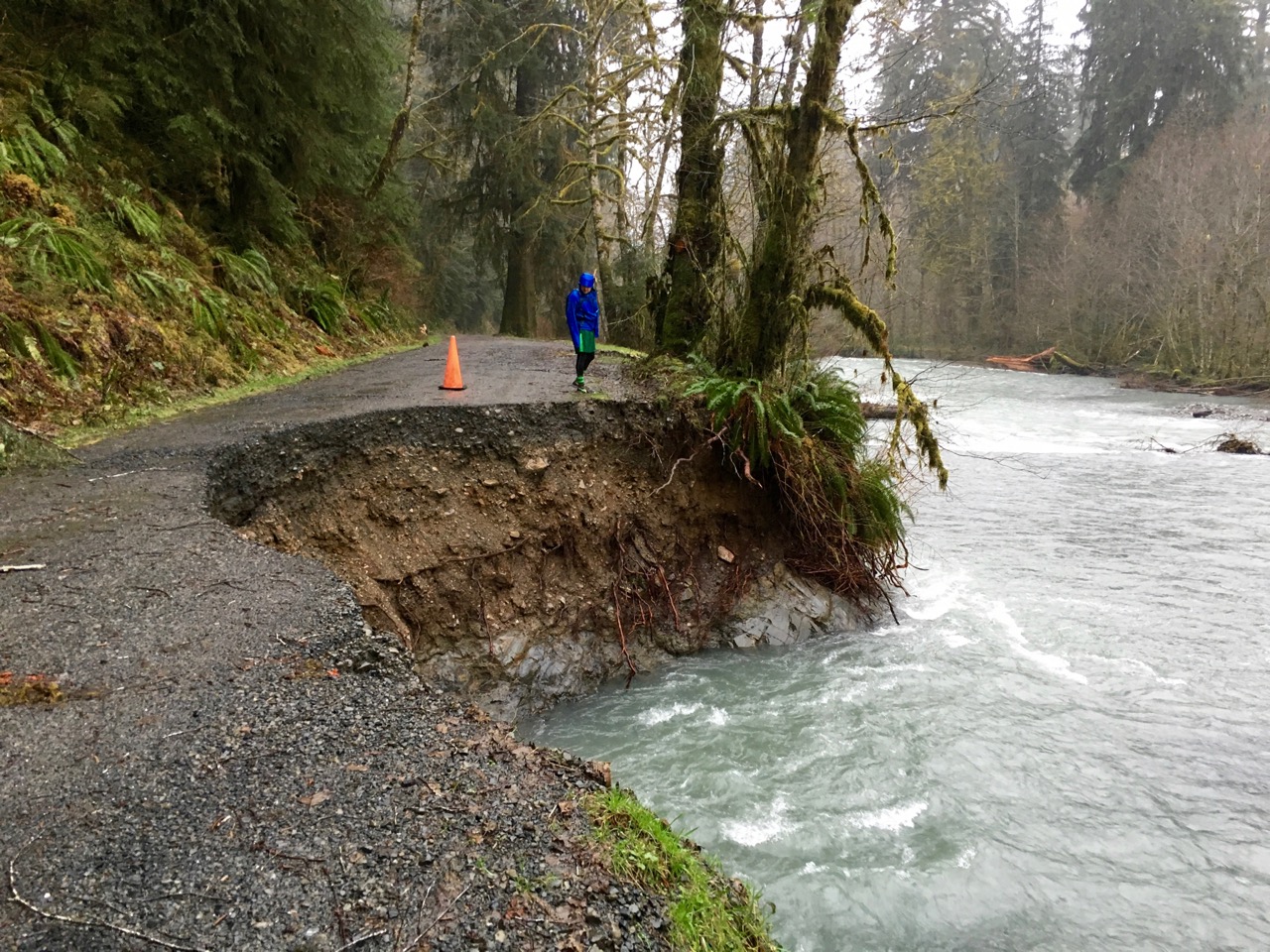 For the next two weeks, the Graves Creek Campground and access to Quinault Rainforest destinations like Pony Bridge and the Enchanted Valley will be off limits to all Olympic National Park visitors. Starting on Monday, September 19th, road crews will begin repairs along several sections of the Graves Creek Road. Since last winter, the road has been closed to vehicles due to large washouts caused by heavy rains and an always shifting riverbed. Access to Graves Creek was cut short, forcing backpackers and hikers to walk along the road for two extra miles before reaching the official start of the trail system in the region. The road is now closed to all access, including hikers, bicyclists and stock, and will closed for at least two weeks.

The Graves Creek Road sustained severe damage during last winter’s storm, as we reported in February of 2016, and has been partially closed ever since. While the road was washed out all summer, thousands of hikers and backpackers made their way up the Quinault River Valley, discovering an amazing wonderland of wilderness and beauty. The two miles of extra hiking didn’t seem to stop anyone, highlighting the incredible draw of the Quinault Rainforest for visitors from around the world.

During the construction period, the road will be completely closed to all entry, including foot, bicycle and stock access. The project and closure is scheduled to take just two weeks and Olympic National Park officials have told us that the road is scheduled to reopen in early October, just in time for fall. If you have to see this area in the next two weeks, access to Enchanted Valley can be reached most easily from the Dosewallips River on the east side of the park, though it will be a much longer hike. If you want to know about that route, please ask us via Twitter and we can hook you up with a few awesome route options. The North Fork of the Quinault is still 100% open and accessible, as is the Quinault Loop Drive on both the North and South Shore Roads around the Lake and in the Rainforest.

For those unaware of the region, the Graves Creek Road is a six mile dirt road leading into one of the prettiest rainforests in the world. Home to elk, bear, amazing day and backcountry hiking and stunning riverside camping, the Graves Creek region of the Quinault Rainforest of Olympic National Park is a paradise for adventurers searching for a more rugged area. For many, this is the destination for first backpacking trips and is considered to be one of the crown jewels of backpacking destinations in the entire National Park system.

We will, as always, continue to provide updates about this and every other road closure in Olympic National Park on our weekly Podcast, The Adventure Dispatch. The Adventure Dispatch is the very best way to know about everything happening in Olympic National Park, from snowpack and weather reports to campground restrictions, road closures and even unique events. Give it a listen and subscribe today!

FRUSTRATED YOU CAN’T GET TO PONY BRIDGE AND GRAVES CREEK? WE CAN HELP YOU FIND A NEW ADVENTURE!