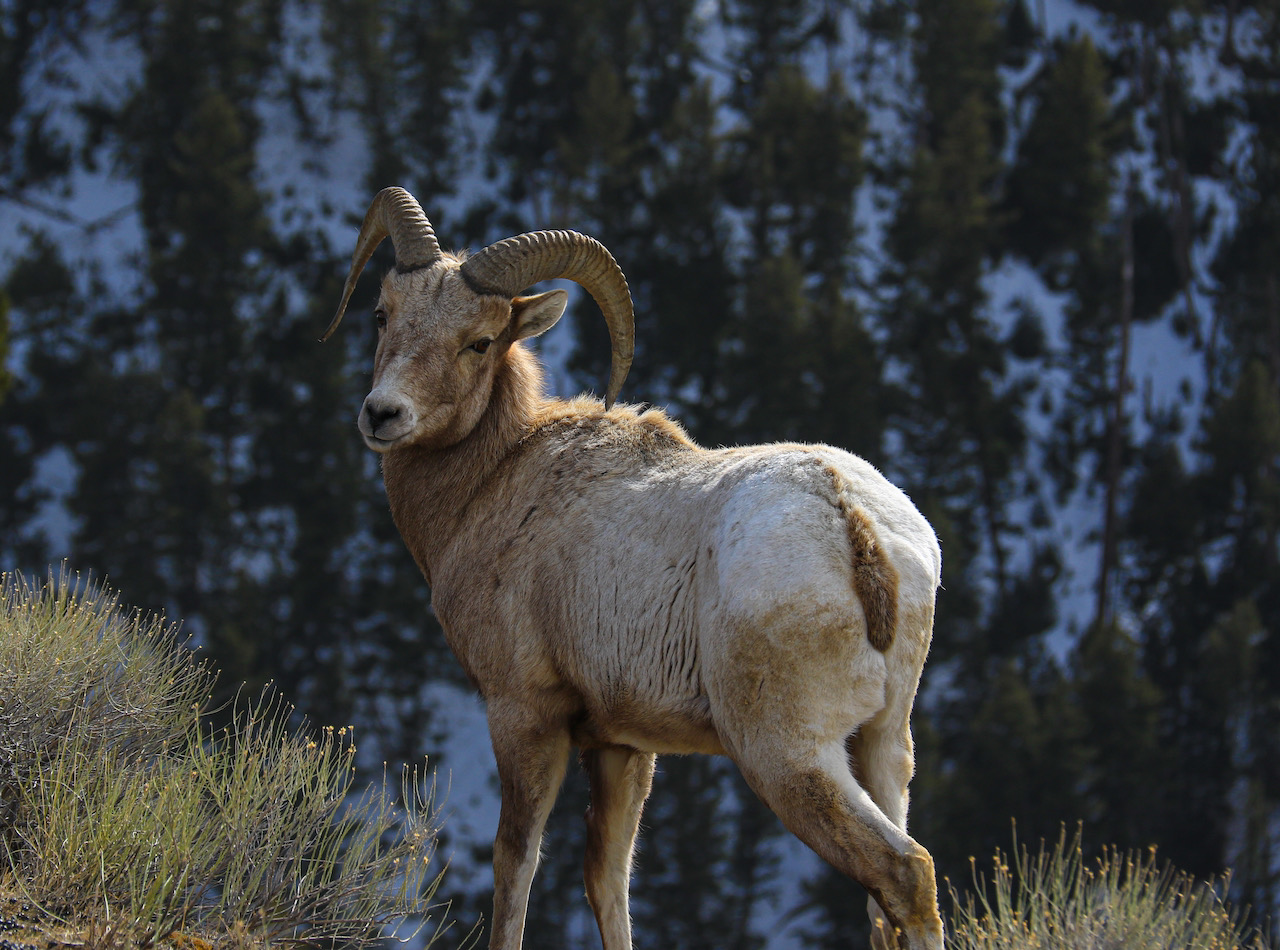 This Week in Yellowstone, we welcome back much needed snow, take a look at the huge jump in grizzly bear numbers, and hear about Yellowstone’s version of first tracks. I also share where you can see bighorn sheep fighting and mating. The snowpack is low, but wildlife watching is picking up. You know you want to visit the park this week.

I went to the park on Wednesday and had an incredible time on the trails and wildlife watching. I caught a stunning sunset, watched a herd of bison run, spotted bighorn sheep ramming heads and mating, and even had a moment of solitude where a coyote walked right by me. If you come to Yellowstone in the next week, you can have all these experiences and more.

Give this a share, ask me a question and let me know how I can help you be ready to visit America’s first National Park this week. If you want to support this weekly series, please consider picking up a guidebook!

In Idaho, Montana and Wyoming, the population of grizzly bears jumped by over 300 bears compared to the 2020 numbers. While that may sound like an impressive feat in breeding and population growth, the new numbers are higher for a reason.

In 2021, the U.S Geological Survey’s Interagency Grizzly Bear Study Team (USGSISBST), implemented new data collection methods that show a much more accurate count. The population of grizzly bears in the Greater Yellowstone Ecosystem this year was 1,096. In 2020 it was 727. Since the 1970s, the range of the grizzlies, which is around 27,000 square miles, is seeing an increase in bears that appears to reflect the natural numbers for the current ecosystem, The rise in population over the decades is something to celebrate, but the momentum of success for increasing the grizzly population from near extirpation is waning.

The pendulum is starting to swing the other direction, with a renewed call for hunting emerging from the impacted states. Wyoming Governor Mark Gordon is using the healthy grizzly population and the increase of human-bear incidents to push a petition to the federal government to delist the iconic bear from the current federal protections. Montana and Idaho, both with pro-hunting elected officials, will now be pushing for it too.

It is important to remember that with this new study, the grizzly population did not increase by a huge amount. The data is just more accurate. It is also important to note that the grizzly bear population is healthier now than it has been for generations and that an increase in their terrain would mean a change to the current way our society interacts with wildlife.

The snowpack around Yellowstone is still not great. In fact, it is worse than last week. On the morning of December 2nd, when I am writing this, the snowpack is just 59% of normal in the mountainous eastern side of park. On the western edge of the park, the snowpack is hovering in the 70% range. The incoming winter weather should help out a bit, but unless the forecasts are being conservative in their predictions, the below average snowpack will remain. It could be bumped up to the 80% area, but I am not going to hold my breath. It is too early to be really worried, but concern is in the air each day that passes when snow is not. December is said to be colder and wetter than normal, giving slight hopes for full mountains by the end of December. January and February are also snowy months in the area, so there is still time.

The map for the Montana and the Greater Yellowstone Ecosystem looks like this:

As I continue to monitor the snowpack in and around Yellowstone this winter, I will share any cool resources that I hear about. This week, I want to share the Rendezvous Ski Trail webcam. I was made aware of it after I shared a story about the cancellation of the cross country ski event last month in West Yellowstone.

The webcam is located at the trailhead of a fantastic cross country ski area I hope to visit this winter. If you frequent the Yellowstone webcams, you should add this one to your list. It is a fantastic indicator of the snow conditions around West Yellowstone, which will be hosting more visitors in the coming weeks and months.

After a very warm and dry November, it looks like snow is finally heading back to the park. The snowpack is at a meager 60% of normal right now, so the forecast is welcome. Out in Cooke City, light snow on Saturday and Sunday leads into a week where the town could see over a foot fall between Monday and Thursday. Highs will be in the 20s, lows in the teens. Gardiner will be warmer and receive less snow. An inch or snow could fall over the weekend, then potentially six more inches through Thursday. Highs in the 30s and lows in the teens will greet visitors and locals. The full forecast is as follows:

This is the weather.com forecast for the three closest towns to the park- Gardiner, West Yellowstone and Cooke City. While they don’t specifically cover the entire region, these forecasts give a great idea of what to expect all around the region As always, weather can and does change fast in the park, so always be prepared for anything.

This coming week, there is a ton of action for wildlife watchers in the park. North of the park, by Cinnabar Basin and the Yellowstone Hot Springs, the bighorn sheep rut action has been impressive. On Wednesday, Dec. 1st, I spotted at least 35+ bighorn sheep, many right next to the road. The rams are aggressive and chasing the ewes, giving you a chance to see rams live up to their name. You may also see the rams and ewes breed, so be ready for that.

In the park, the bison are herding up well, hanging out largely between Mammoth and the pullout by the confluence. Elk are also prevalent throughout the park, mostly near Mammoth and around Gardiner. You’ll also see quite a few pronghorn around the Roosevelt Arch in Gardiner.

Wolf wise, it was a slow spotting week, so odds are there may be a kill more easily seen in the next week. It’ll probably be around Lamar or Soda Butte, out near Slough Creek or around Hellroaring Mountain, if I had to guess. At some point this winter, I can guarantee a wolf sighting in at least one of these spots, if not all three.

There are rumors of a great gray owl in the park, but sightings and locations have been inconsistent. I will update this if I can get more specific information.

Other than that, coyotes are getting easier to see. One with a leg injury has been in Lamar Valley for the last two weeks. I am a little worried about it, as it travels on the road a lot. Drive safe and slow, please.

I also saw bighorn sheep above the Yellowstone River Picnic area, across from Calcite Springs. There were also a few on the top of the ridges between Mammoth and Gardiner.

The bear den near the Petrified Tree is still being watched all day by people, but few sightings of the bear have taken place. With this snowfall, it could be worth a stop to see if there are fresh tracks leading in or out.

Want the best tips and locations for wildlife sightings on your Yellowstone trip? I wrote a book for that very purpose! Pick up your digital ebook or paperback copy now!

The roads and campground information has not changed since last week. The only road open to passenger vehicles is between Gardiner and Cooke City, Montana. There are some icy spots to be aware of, especially with some of the incoming snow. Most days this week will be ok, at least to Roosevelt Junction. On Monday, Wednesday and Thursday of next week, the roads could be quite snowy. Plows will be running during daylight hours. If you aren’t used to driving in snow, do not take the park roads that day until you hear they are good.

For up-to-date information consult the map above, call (307) 344-2117 for recorded information, or sign up to receive Yellowstone road alerts on your mobile phone by texting “82190” to 888-777 (an automatic text reply will confirm receipt and provide instructions). Anticipate possible road closures due to inclement weather and dangerous driving conditions.

The only campground open this week is Mammoth. There are a few people camping there during this time of the year, but few and far between. It will be cold an snowy some of the nights, so if you are hoping for a chilly and fun night, camp here this week. You can check the status of campgrounds in the park online here.

Now that snow is back in the forecast, trails will be a little harder to travel for the average visitor. The snow could be deep in spots, presenting an opportunity to see the animals of Yellowstone in the fresh powder. Bison will be covered with snow in the early morning hours and may have snow beards after using their massive heads to clear the snow from the tasty grasses beneath. The temperatures will be frigid overnight too, creating an opportunity to see the breath of the bison and maybe even icicles hanging off their facial hair.

This is also a great time to go and see the ice and snow at Undine Falls from either side. The paved overlook is always worth the stop, while the side trail from the Lava Creek Trail should be stunning. If one does feel inclined for a short walk, hit up the Pebble Creek Trail, north of the camp , or the Lamar River Trail up to Cache Creek. Wraith Falls is also a fun snow jaunt.

Get those Yellowstone First Tracks!

If you can, find a trail or road to walk the day after a snowfall. This will give you a chance to see the first tracks of the animals that frequent the area you are walking. A few locations to check out are the road up to the Petrified Tree, the seasonal road to Blacktail Deer Plateau, and of course, Slough Creek Road. The latter will be full of prints, with wolf prints often seen here. You’ll also see the smaller prints of a coyote and even small ones from foxes. Print watching is a newfound hobby of mine and I figured I would share it. There is nowhere else in the world, that I know of, where one can follow a the prints of a pack of wolves for miles over wilderness. You may even get lucky and see a late in the season bear print! 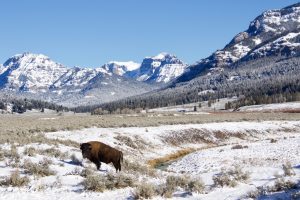 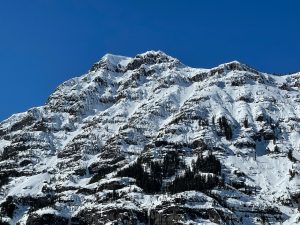 Next post This Week in Yellowstone: December 10th through December 16th, 2021