T’was the night before Christmas all along the O.P.

Not a creature was stirring; even the marmots were asleep.

The stocking were hung by the campfire, from Olympia to Neah Bay

In hopes that St Nicholas would soon be on his way;

The hikers were nestled under their blue tarps and tents

While their dreams had visions of glissading and safe descents

In the wind, cold and wet, nobody complained

We focus focused on staying dry in the forests, world famous for rain

When out in the Hoh, there rose such a clatter

I sprang out of my tent, to see what was the matter;

Out to the Elwha, I flew up the ridge like a Hurricane

Looking and searching across the peninsula in the driving rain.

The moon broke through the clouds, showing Mount Ellinor

I saw the entire Olympic Peninsula, from rainforest to sea shore

Out of the corner of my eye, above the city of Forks,

With a little driver, dressed in rain gear and a beard, full and thick

I knew in that moment, over the Olympic Peninsula, it must be St. Nick

More rapid then the Quinault River, flowing down to the Ocean

He called out names of Rain-Deer, causing quite a commotion,

On Constance! On Crescent! On Buckhorn and Skokomish!

To the top of the Mountains to the rainforest trees

We must visit everyone that understand the Olympic Beauty

As the sleigh got nearer, the winds blew the cedars and firs

The trees were too thick, I could see nothing but blurs

Until above my tent, the Rain-Deer finally flew

With a sleigh full of gear and St Nicholas too!

Then the sleigh set down on the nearby snow shelter roof

I heard the prancing and pawing of each Rain-Deer hoof.

As I peered toward the noise I heard a small hoot

Out of the ferns was St Nicholas, in Gore-Tex boots

Dressed in Outdoor Research Gear, from head to toe

A multi-day Osprey sack was flung on his back

A shine, deep green, like the forests, came from his eyes

His cheeks were red, like a Hood Canal winter sunrise

His smile was inviting, like the Marymere Falls Trail

He held a pipe, burning just cedar, between his teeth

The smoke rose around his head, like a decorated wreath

He had a big broad face and a round little belly,

That shook, when laughed like beached fish of jelly

He spoke not a word, but laid out new supplies and gear

As he finished he came over, and shook my hand

Thanking me for sharing the world’s most beautiful land

As he walked away from our camp, he gave a whistle

And the Rain-Deer flew down, scaring a bear from the thistle

“A Merry Christmas to the Olympic Peninsula and the Pacific Northwest”

WANT TO FIND THE BEST TRAILS IN OLYMPIC? 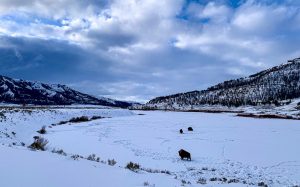