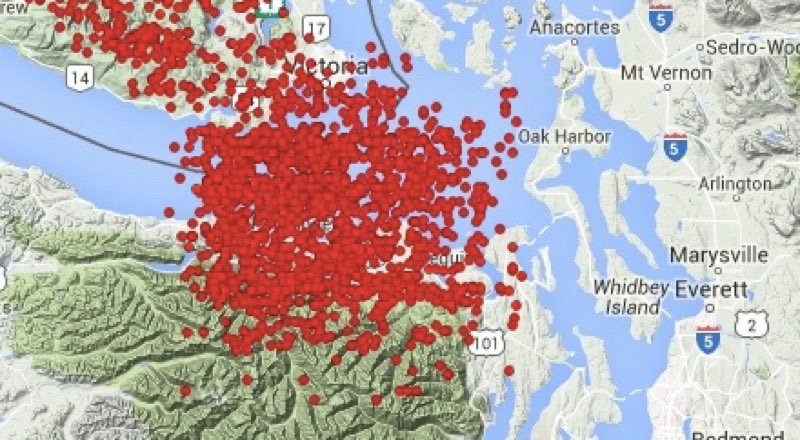 Along the northern end of the Puget Sound and Strait of Juan de Fuca, the faults are waking up. Mere months after The The New Yorker wrote an article saying residents in the greater Seattle area were doomed, the region has been rocked by thousands of earthquakes. From January 1st, 2016 through January 4th, 2016, there were 2,413 earthquakes in the Salish Sea region of the Pacific Northwest. Even more amazing is that since Christmas Day, nearly 8,000 small quakes have hit Vancouver Island, the Salish Sea and the Olympic Peninsula of Washington State.

Before you panic and think this is a precursor to “The Big One”, it is worth understanding exactly what is going on. The Outdoor Society recently emailed a staff member at the United States Geological Survey (USGS) who helped not only calm our nerves, but also learned some good information about the fault activity in the Salish Sea region of the Pacific Northwest.

The earthquakes shaking the region are not large, and usually occur without press or fanfare. In fact, roughly 99.99% of these quakes have been under magnitude 2.0, with only one large quake, a magnitude 4.3 near Victoria, BC, felt in the area being reported.  The quakes are part of what is called an earthquake swarm and a Slow Slip Episode. The Slow Slip Episodes and Swarms are actually quite common in the region. Around Southern British Columbia and Northern Washington State, they have been occurring every 14 months or so since at least the 1990s.

It is important to note, as the map indicates, that these small events are part of a much bigger underlying process. Altogether, the seismicity marks where slow slip on the subduction zone plate interface is occurring, and the total amount of slip (a few centimeters) over such a large area can equate to a magnitude ~6.5. It just happens slowly enough that these low-level tremors are the only seismic waves generated.

What does this mean?

Since these quakes are part of a known pattern, the news about the frequency or number should not scare anyone. While some media outlets are blaming this quake swarm on fracking, the quakes appear to be a natural event that occurs approximately every 14 months. Instead of building up pressure for one large quake, our swarms and slow slips are relieving pressure on the regional tectonic plates. As Aaron Wech of the USGS shared, the total amount of pressure released from the Slow Slip can equate to a magnitude 6.5. Please read  Official Article from the USGS about the tremors here.

The Slow Slip swarms of earthquakes that are hitting Vancouver Island and the waters of the Pacific Northwest is part of life along and around tectonic plates. They should not cause fear or panic, but instead serve as a reminder that we live in an area that can (and will) have numerous earthquakes. Right now, the plates are sliding fine, working off stress instead of bottling it all up for one big episode. Personally,  I hope that this pattern keeps up and continues to possibly delay “The Big One” that we have been hearing about for decades. That being said, please remember to always be prepared in case there is a larger slip and we do have strong earthquake. Might as well be prepared, right?

As of January 7th, 2016, the earthquake swarms have continued. The are still drifting Southeast, though no reports of shaking have been felt in the region. The quakes are now under the non-volcanic Olympic Mountains and the fjord of Hood Canal. On January 7th, there were another 315 small tremors suspected. 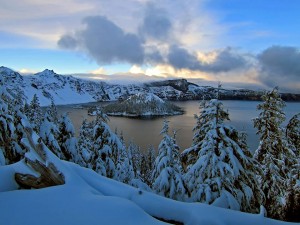 Next post The Best Eagle Watching in the Pacific Northwest