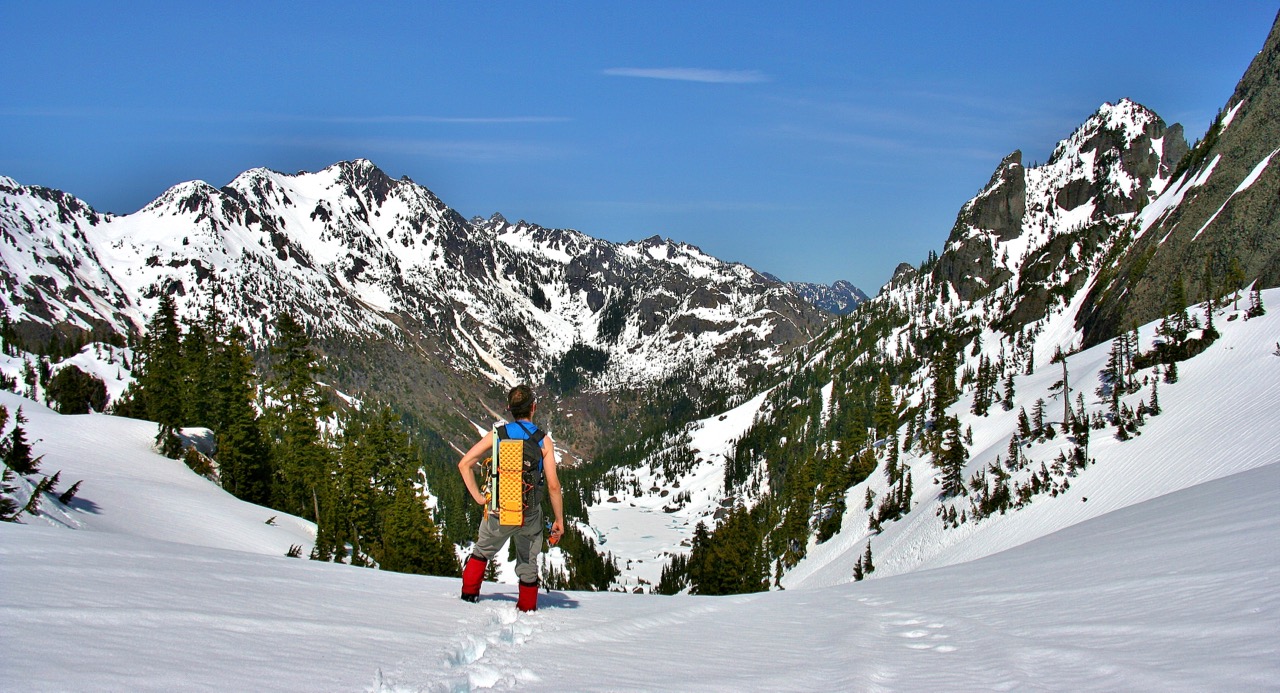 I am not a tall person. Not super short, either, but almost all of my friends are taller than me. It isn’t uncommon for me to feel like everything around me is huge. Yet, even standing next to the tallest of people doesn’t make me feel as small as when I am dwarfed by the awesome grandeur of wilderness. Climbing a peak to see barely finite wilderness expanding as far as the horizon makes me feel like an ant in a State Park and I love that feeling. I long for the days of being completely insignificant in the middle of pure wilderness and recall the days when I was with happiness. One such memory was my first trip up to Glady’s Divide in Olympic National Park. The link is to an old post with old books. Get your new Olympic Guidebook here.

It was May, and the forecast called for sky that would be the bluest it had been in seven months. We had survived yet another dreary, drab winter in the Pacific Northwest and I was itching for what I assumed was adventure. It might have been my flannel, as I don’t recall washing it that often, but that probably should have been kept to myself. I was ready to get outside and “get on top of something,” as I often joked, needing a summit to nourish my explorer soul. More than likely, I was flipping through guidebooks and looking over maps, trying to find something to do to take advantage of the perfect weather.

Almost on cue, my phone buzzed and I had a message from my newest of hiking buddies at the time, Marcus aka “Critter.” He asked if I want to go up and set the first tracks up Gladys Divide in the Staircase region of Olympic National Park. Having never been there, I agreed and plans were made to go and explore the next day. I quickly packed a bag that night, ran to the store for some snacks and went to bed, eager to get the day started.

We met in the early morning hours at the Staircase Parking lot in Olympic National Park, where just a few other hikers were milling about. I was dressed in my usual ridiculousness that I would wear while hiking, including shorts and long socks. Sure, we’d hit snow, but I had gaiters in my pack. Marcus was, as he always is, completely prepared for anything, carrying his version of the ten essentials that I trusted completely. We weren’t expecting anything crazy on this long day hike, but anytime you are hiking nearly 20 miles with 4,000 feet of gain, you need to be smart.

The trail to Gladys is one of my favorites, as it serves as a near perfect microcosm of the eastern Olympics. Starting along a gorgeously wild river, the trail leaves the slow elevation gain and heads right up the mountain. Not incredibly steep, but a seemingly endless onslaught of tilted trail, we hiked up full of pep and excitement, hoping to soon reach Flapjack Lakes. As we neared the lake, we soon hit snow, post-holing the next 3/4 of a mile until we reached the lake. Here, under the watchful gaze of the Sawtooth Ridge, we ate some food and prepared ourselves for the next section. The trail, as with the entire forest, was covered with feet of snow. We would have to route find in a place I had never been.

To reach Gladys Divide from Flapjacks Lakes, the trail isn’t too complex when you can see it. When it is covered, your directions are simple, but not reassuring. Hike until to reach a creek, then follow it up. Again, in the summer, it is a great hike with one hill and I highly recommend it. In the snow, it was a different beast, but I trusted Marcus and as we would stop and read the map together, we reassured ourselves that we were going the right way. Ok, he actually reassured me.

After a few more minutes of post-holing up the hill, we crested the ridge and the first glimpse of the beauty we were getting into came into sight. A wonderland of mountain peaks and towering trees, pillowy snow and signs of fresh avalanches expanded out in the 90 degree angle I could see. I was mesmerized, dumbfounded and awestruck. All at the same time. Had you told me it would get even better, I would have started crying. With the combination of the blue sky and white snow, the green trees and the black rocks, I knew that today was going to be one of my favorite life memories.

Snapping back to the hike, I watched and followed Marcus as he worked his way through knee-deep snow, leaving the first tracks of the spring in the valley. With each stride, we climbed a little in elevation, finally leaving the trees and entering what I was told was a boulder field. Later trips would confirm this, as I only saw a handful of rocks rising through the snow. Carefully, we worked our way through, which distracted my gazing around in every direction. Head down, we hiked the last rise and reached Gladys Divide.

The view left me speechless, only able to communicate by shaking my head, with my smiling mouth agape in wonder. Down below me was the start of the Hamma Hamma River and pristine forests, a true wilderness wonderland. Behind us was the snowy path through the narrow valley, with the only signs of life being the tracks of our footprints. To the left, the hillside continued to climb, with Glady’s Peak calling for us. That would have to wait for another day though, as the slopes were very avalanche prone. Instead, I found myself enamored with the view to the left of the divide. when Mount Cruiser and the Sawtooth Ridge basked in the warm sun.

Scratched with fresh avalanches, the peaks looked insanely out of place, showcasing just how wild the backcountry of Olympic National Park can be. The sights from that day were burnt into my memory, allowing me to be transported there whenever I close my eyes, smelling the melting snow and drying trees. As we hiked back to civilization, I couldn’t help but grim from ear to ear. We were the first people to see that view since the first heavy fall snow, and it was more than I could have ever wanted.

From that day on Gladys Divide would become one of my favorite hikes in America, all because of how small I could feel in the enormousness of pure wilderness. Gladys got me hooked, addicted to this feeling of celebrating just how large and wonderful our Public Lands are. We all deserve a lifetime of these moments, and hopefully this will inspire you to go out and find your own perfect moment of feeling wonderfully insignificant in nature.

This post was written in one hour for the #NatureWritingChallenge

WANT TO HIKE GLADYS AND ALL AROUND OLYMPIC? 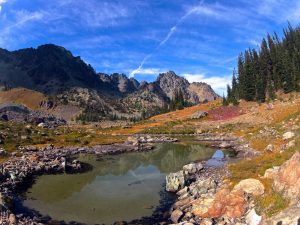 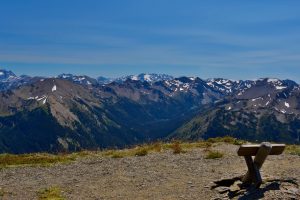