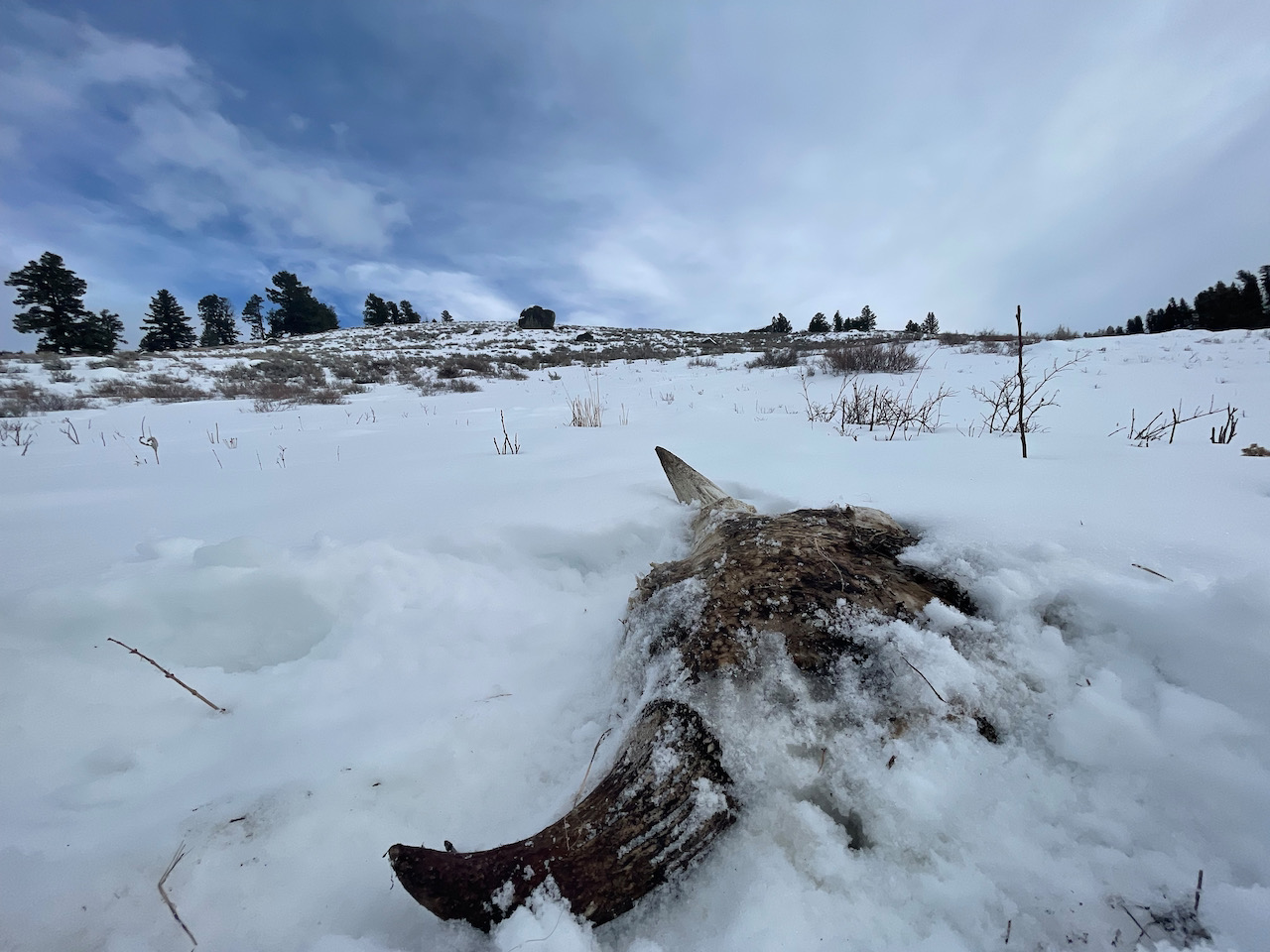 O Winter, where art thou?

This week in Yellowstone, I share some exciting wildlife watching that occurred last week, provide context to the improvements coming to cell and internet service in the park, and suggest an overlooked road in the park to drive. I also take a serious look at our snowpack, before sharing my tip of the week. Hopefully, you get to be in Yellowstone this Week! If not, give this a read and plan a trip!

If you follow any social media site about Yellowstone, I am sure you have already heard this news. On February 14th, YNP officials issued a press release that read “Yellowstone to Improve Telecommunication Systems in Developed Areas.”

This immediate set off a firestorm online, with people bemoaning that the improvements will destroy the park. The fury was so great that I had to run outside to make sure that the sky was not actually falling. Turns out, the sky is not falling, nor are the improvements going to negatively impact the park. Those who read beyond the headlines discovered that the updates will not only improve life for rangers and park staff, but will also help restore views around the park by removing unsightly towers.

The press release states that work “… will enable the park to remove 25 (five reflector panels and 20 antennas) pieces of antiquated and obsolete telecommunications equipment currently located on numerous mountain tops and backcountry sites, while substantially improving the connection speeds needed for management and operations of the park.”

NPS officials also said that the installation of 187 miles of fiber optic cable will take place in previously disturbed areas along park roads, leaving the rest of the park untouched. They continued by sharing that no new cellular towers will be installed under this project.

The park’s existing microwave radio system was originally installed between 1979-1990. Imagine how outdated that technology is.

The same year East and West Germany were reunited.

A year before the Bulls had won a championship.

This is a win for park employees and staff. Improved telephone, cellular phone, park computer networks and broadband internet services to meet critical park operations, safety and emergency services and visitor information needs and expectations in developed areas. The updated systems will more than likely have little to no impact on anyone’s day to day visits to the park. Pretty much any argument against this is not based in fact or reality and this press release should be celebrated. They did this at Mount Rainier National Park a few years back, there was a public outcry, and now nobody talks about it or probably even remembers being distraught over the news. The same will happen with Yellowstone.

The Future of Yellowstone’s Bison Is Still Up to You

Only a few more days to tell the park what you think the region’s bison future should be. I wrote about it in the last post, as well as a standalone piece on the website. This is the link for all the information you will need to be able to weigh in: https://outdoor-society.com/yellowstone-national-park-invites-you-to-help-decide-the-future-of-bison/

You only have until the end of the February to have your voice herd, err, heard!

The Wolf Hunt Around Yellowstone is Over

Late in the day on Thursday, February 17th, 2022, Fish and Wildlife officials announced that the 82 wolf quota in region three had been reached. The news means that wolves around Yellowstone will not be hunted any long this season. The news is good and one that should be shared, so tell everyone you know that the slaughter and blood lust of these apex predators is over. For now.

The 70s and 80s are back and not in a good way. In the late 70s and early 80s, cocaine was everywhere. At least that is what the movies tell me. Every disco or club, tavern, concert or boardroom had piles of the white stuff. Mountains of it.If the people in those movies really used cocaine that much, they would be disappointed by the snowpack in and around Yellowstone. The white stuff is hard to come by.

There is snow all around. I should clarify that. It isn’t like the winter of 2014-15, when Bunsen Peak was bare in May. But it also isn’t great at all. Despite some snow events in the last few weeks, and some serious snow coming this week, the snowpack continues to hover in the same area. We are not seeing an increase, and also not a serious decrease. Mediocrity in the middle. This week, I don’t expect much of a change and if there is one, it more than likely won’t be for the positive. 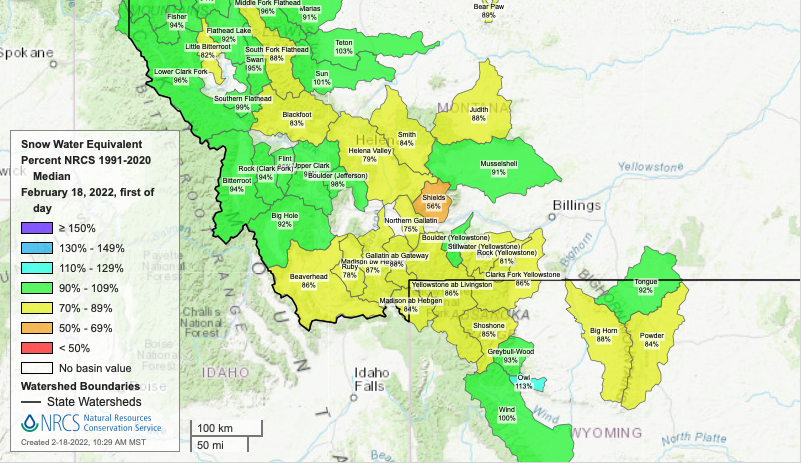 The weather for the coming week will not be great. Unless you love weekend snow and temperatures around zero or lower. Which many of us do. If the cold, snowy weather is your cup of tea, you’ll be stoked about the forecast, especially Sunday through Thursday. 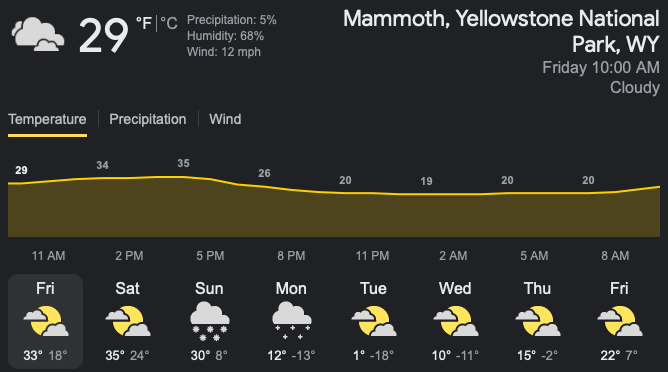 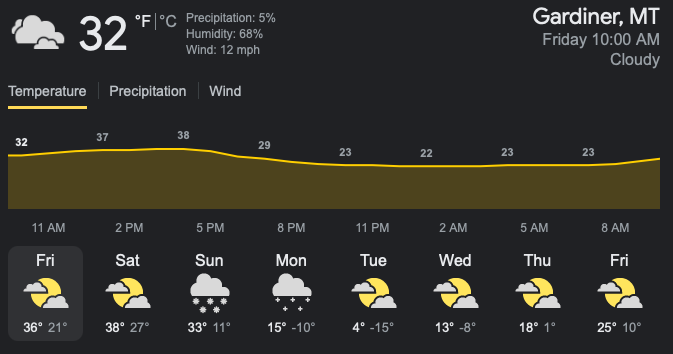 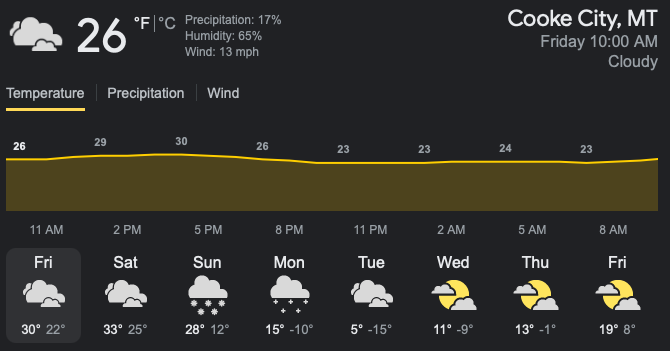 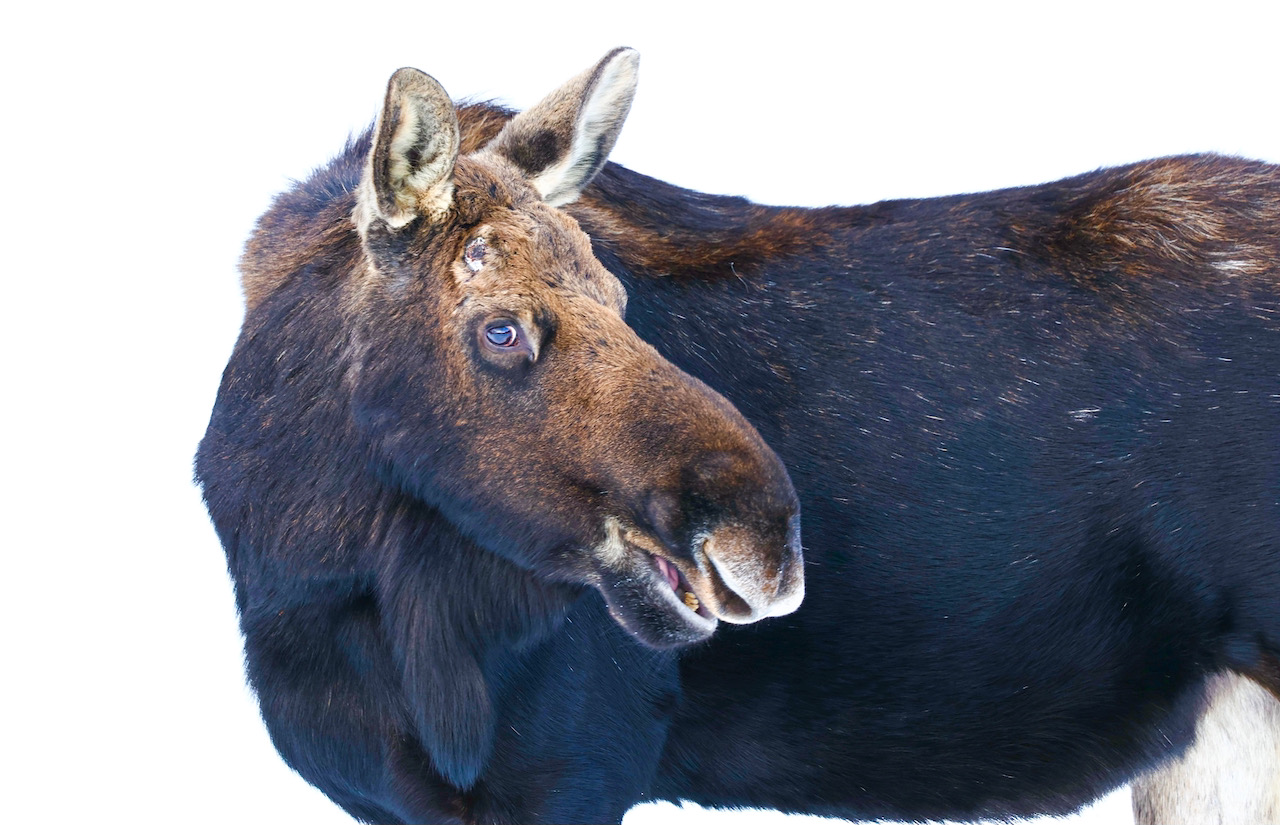 The moose have been giving some incredible wildlife watching moments out near Pebble Creek, while there has been some activity at the bear den near the Petrified Tree area. Last week, wolves took down a mule deer right near Mammoth, granting visitors an incredible opportunity to see them in action. The wolves are definitely on the move and tracks are seen on trails all around the northern range. Also this last week near Mammoth, a cougar was spotted, dazzling visitors with one of the most rare animal sightings in the park.

Elsewhere, bison jams seem to becoming more prevalent, especially between Undine Falls and Roosevelt. If you are the lead car and encounter a herd of bison meandering on the pavement, please don’t stop in the road. Find a pullout or slowly move forward, forcing them off the road. I know this is counter intuitive, but it is the recommended by ranger way to handle the situation. If you do not feel comfortable with this, pull off the road as soon as possible and let someone else take the lead.

If you want to see bighorn sheep this week, head to the confluence of the Lamar River and Soda Butte Creek. Some rams have been hanging out on the hillside north of the area. There are also plenty of ewes just north of the park near Corwin Springs. I have heard and seen pictures of otters between the confluence and Pebble Creek, but have yet to see it with my own eyes.

Elk are all over, but have mostly visible north of the park in Paradise Valley down to Gardiner. You’ll see a few in the park, but nowhere near the size of the herds out of it. 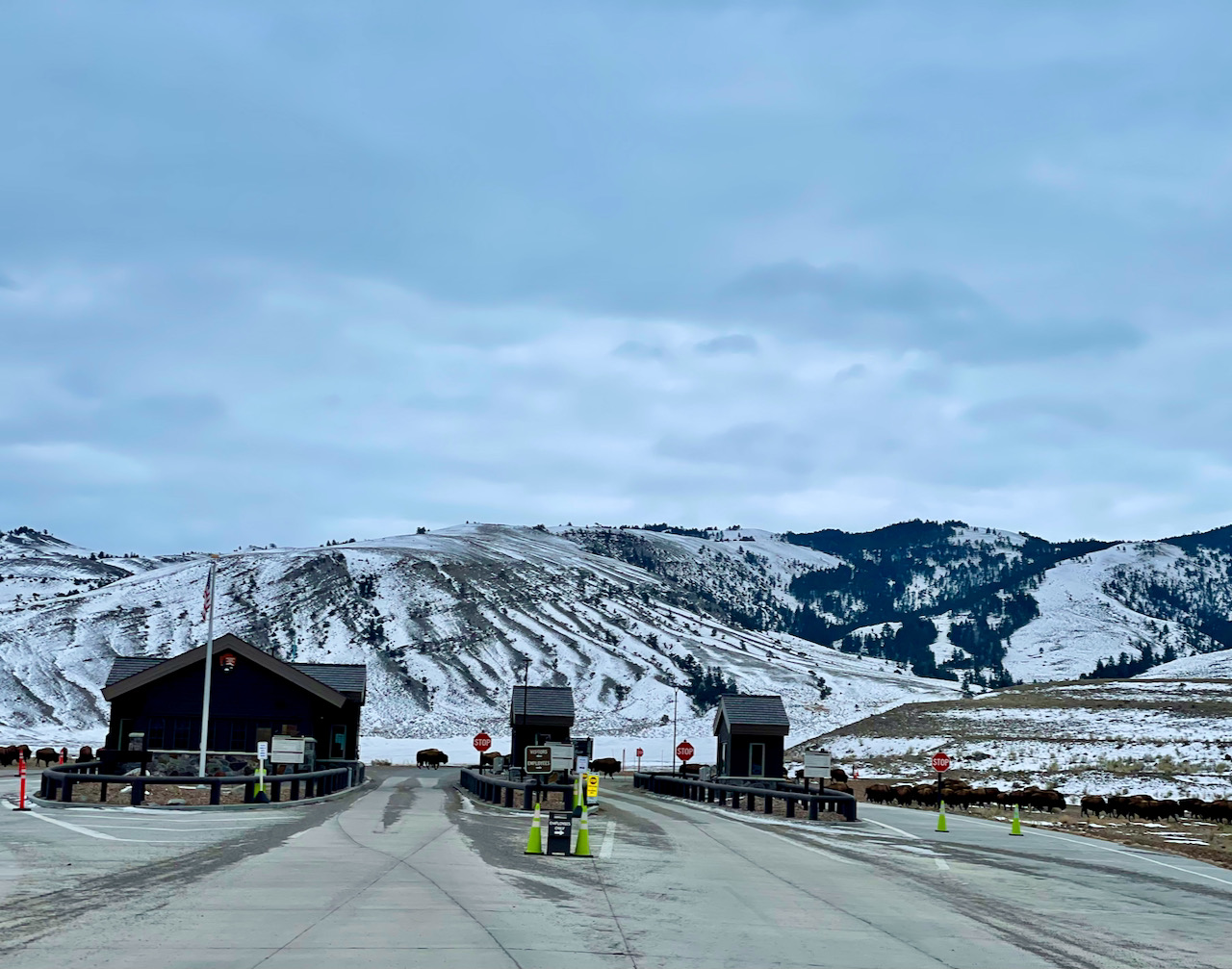 When the weather is bad, so are the roads. Last week while driving in the park, I was experiencing slight flurries in Mammoth. By the Blacktail Plateau Road, there were inches on the ground and it was drifting. Five miles later, more flurries. So goes with roads in Yellowstone. Unless a huge, hidden snow event rolls through this week, expect that some stretches of road will be great, others will not be.

The plows will be out when needed and typically, the best time for the roads is around noon until sunset. There is enough traffic in the AM hours to help, even on the bad days. Chances are though, this week the roads will be good nearly every day and none of this will be a serious worry. Just drive slow and pay attention.

I’d say that the frigid temps in the forecast will scare people away from the campgrounds this week, but that would be a lie. The temperature makes no difference for winter camping at Mammoth. Very few people attempt it, be it 40 or -40. Mammoth is the only campground currently open and you’ll have your pick of sites this coming week. 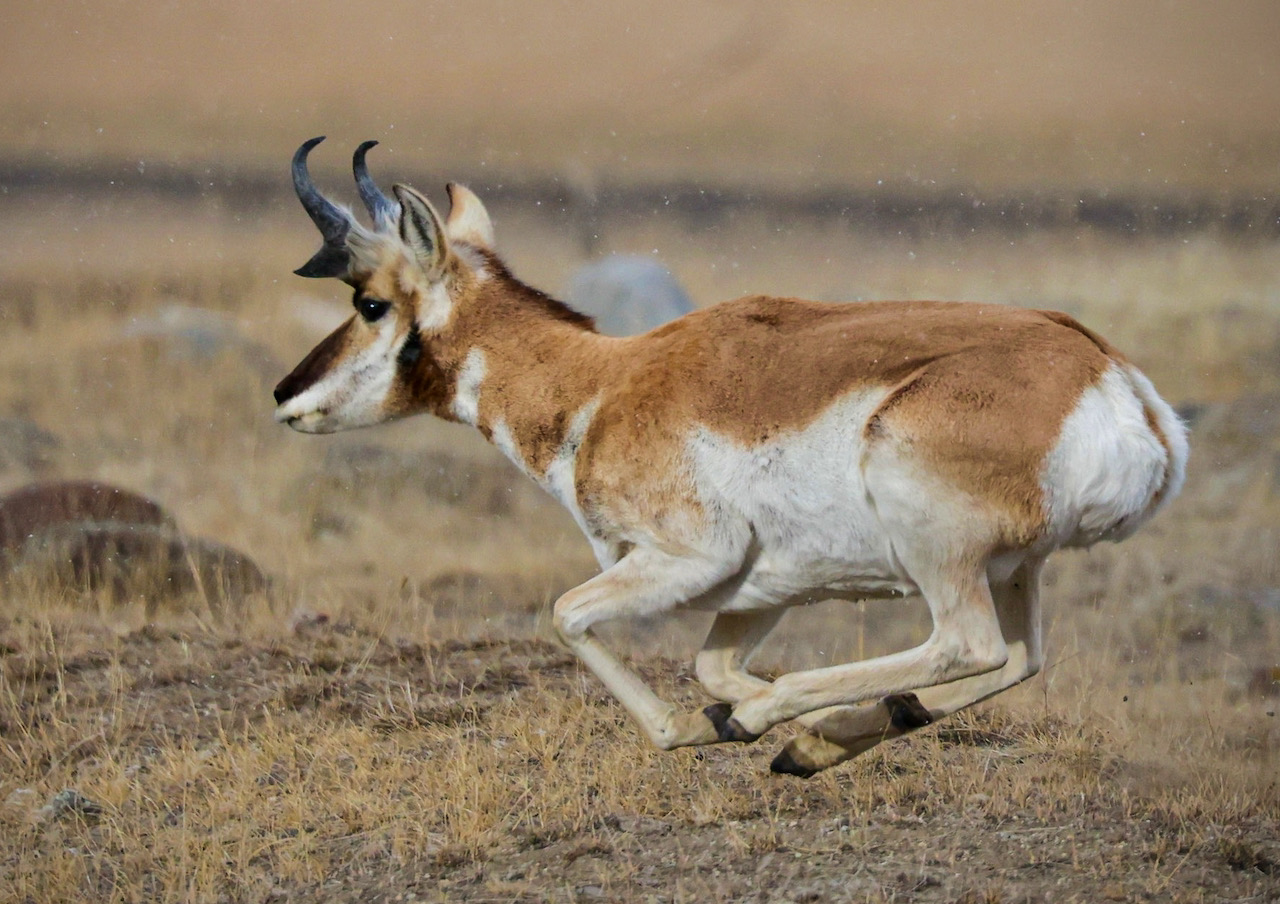 After passing under the Roosevelt Arch on your way out of Yellowstone, stay left and stay in the park for a few more miles. Following the Old Yellowstone Trail South, the route you’ll want to take is 7.9 miles from Arch to the junction with Cinnabar Basin Road. Along the bumpy, dirt road, you’ll see hawks, bison, elk, deer pronghorn, eagles and possibly bighorn sheep, all usually pretty close to the road. To the west, you also get unrivaled views of Sepulcher Mountain, Electric Peak and the geologically wonderful Devil’s Slide. There is also an old cemetery to wander one mile past the arch. There is a small sign marking the road, but it is easy to miss.

The road is manageable for most cars, but take it extremely slow. It has some pretty gnarly washboard that will bounce your car if going too fast. There are a few potholes and usually some standing water, but be smart and you’ll be fine to drive it. Once you take a right to get back on Highway 89, you can swing by the Yellowstone Hot Springs for a scenic soak. 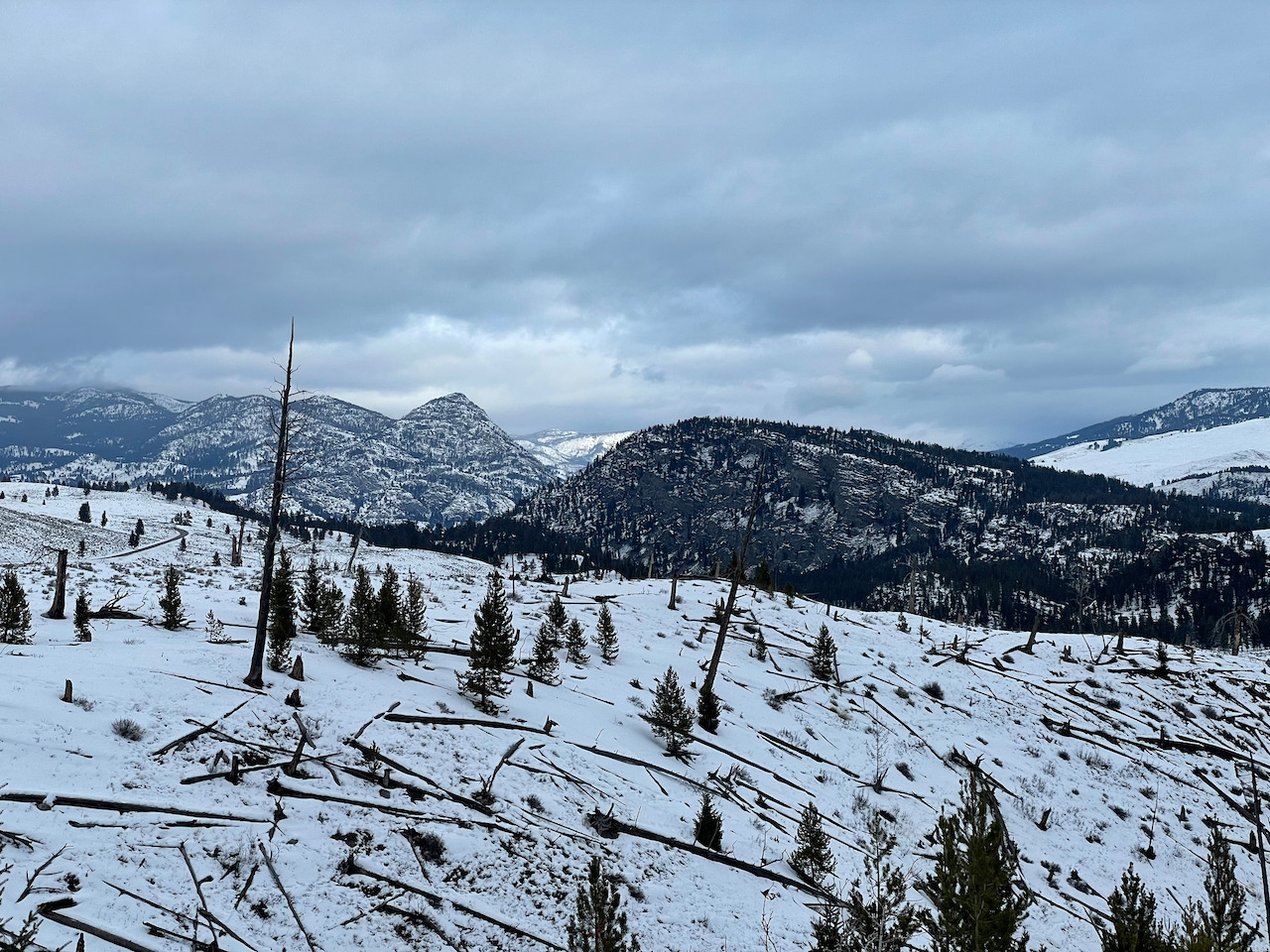 When we visit the park, we tend to zoom back and forth between spots, trying to cram in as much wildlife watching, hiking, sightseeing and bucket list items as we can each day. Visits are usually shorter than we’d like and we don’t want to miss anything. Which is understandable. There is a definite desire to make every moment count in America’s first National Park. Trying to do so can prove to be stressful, tiring and potentially even make the trip less than ideal.

That is why I try to spend 5-10 minutes a day doing nothing but sitting at a pullout or scenic spot and watching the world pass me by. Sit along a riverbank, on a ridge, or overlooking a valley and just listen and watch. Silently. Patiently. Appreciatively.

The first minutes will be tough, as your brain will be screaming about all sorts of nonsense. Block it out. Focus on anything you can see. Breathe deep and reflect on the fact that you are staring at an environment nearly untouched by civilization. You are gazing at the wild. The raw landscape we were meant to take in each and every day.

Try to do this each day you are in the park. It will not only help recenter yourself with the park, but it may even lead to a unique wildlife sighting or life-changing breakthrough. 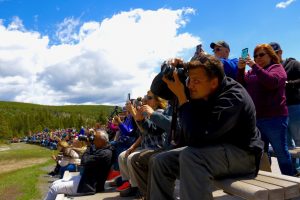 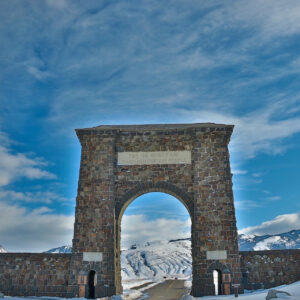 Next post This Week in Yellowstone National Park: February 25th through March 3rd, 2022