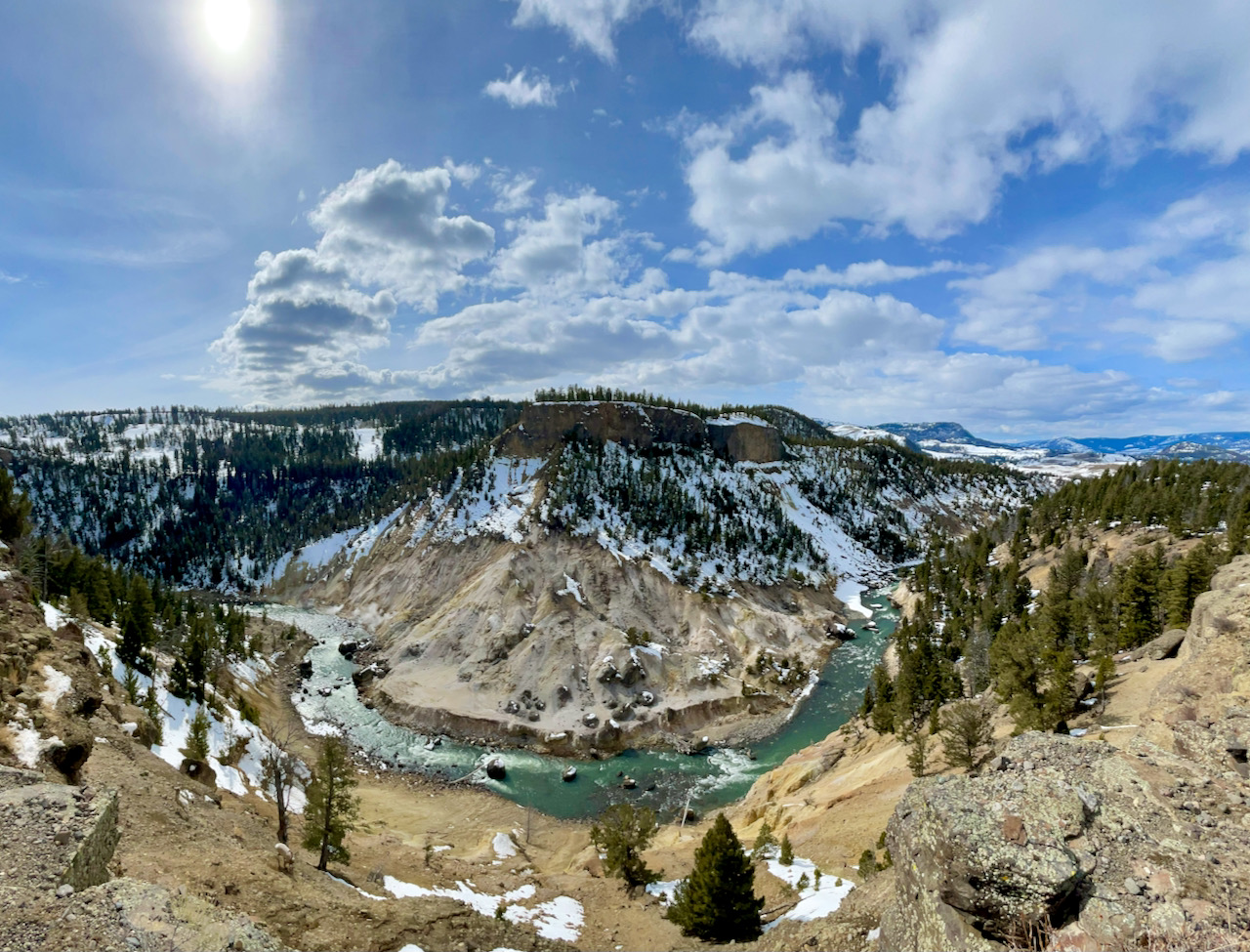 This Week In Yellowstone, I recap the amazing wildlife sightings of last week, give an unfortunate update on the region’s snowpack, and then liven things back up with a talk about bear spray and share a spot where you can have an entire valley of solitude. If you are headed to the park this week, keep an eye out for bluebirds. 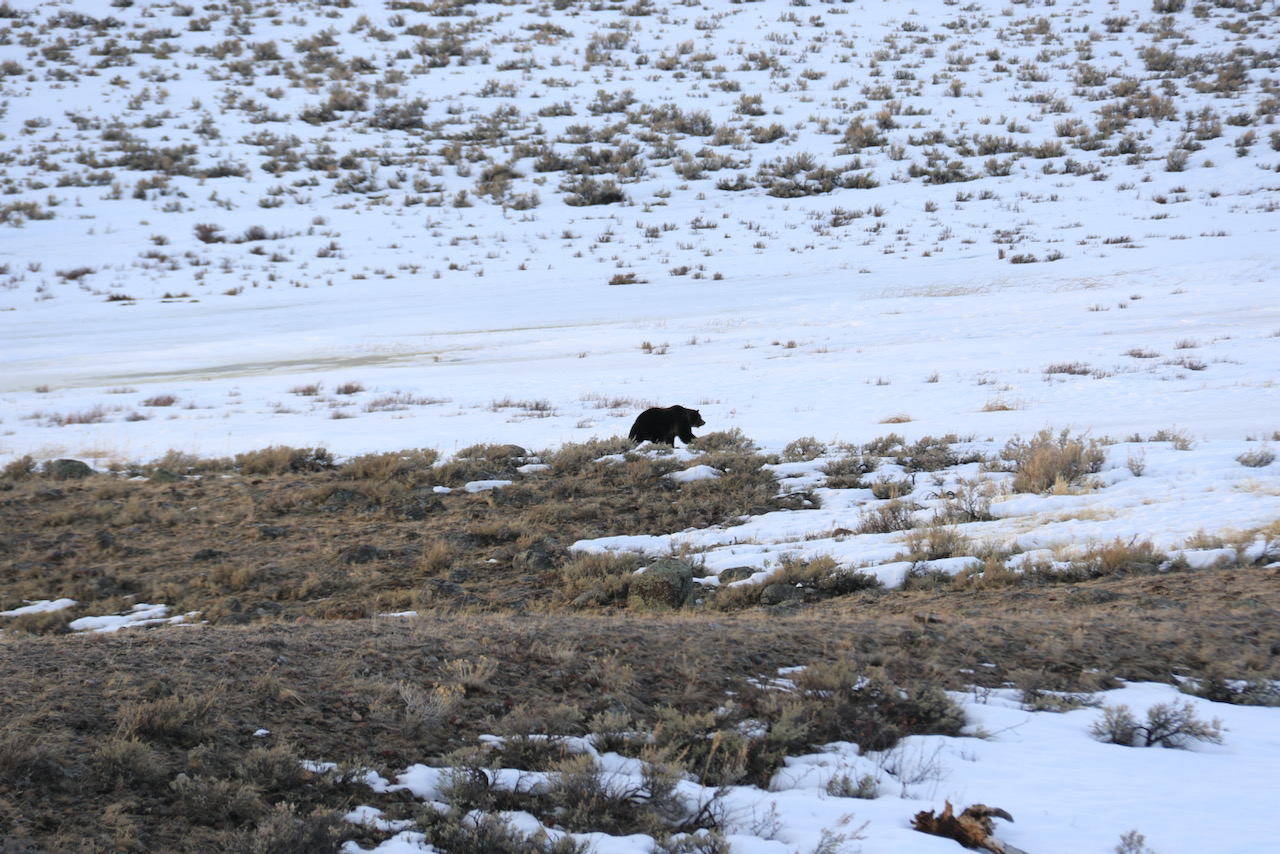 The Grizzlies are Active

If you pay attention to any park news, chances are you already have heard that the grizzly bears are now active in the park. The first grizzly bear sighting of 2022 just occurred and we are stoked. On Monday, March 7, a pilot supporting Yellowstone National Park wildlife research observed the first grizzly bear of 2022. The adult bear was seen walking in a meadow in the west-central part of the park. I wrote about it more in-depth earlier this week. You can read the story here.

A Wolverine was Spotted!

A few extremely lucked visitors to the park last week witness one of the more rare wildlife sightings in Yellowstone. On March 5th of 2022, a Gardiner-based tour with ‘Yellowstone Insight’ spotted a wolverine middle of the highway near Soda Butte Creek.

According to park biologists, there are only about six wolverines in Yellowstone at any given time. Just six of them. In this huge landmass. It is no wonder that sightings are far and few between. Previous to this lucky encounter, there was only one documented still photograph of a wolverine in Yellowstone. One. Ever. There was a trail camera that captured a video of a wolverine in the park in January of 2021, but that doesn’t count as a true sighting. You can see the pictures and video at this link to the story on KTVQ news.

The good news is that the park has some experience dealing with this. A detailed article in the Billings Gazette reports that: “In 2019, a single cisco was netted in Yellowstone Lake. A study of the fish found it had been born in the lake. Park biologists have been searching to find more of the invasive nonnatives. More famously, in 1994 lake trout were discovered in Yellowstone Lake, perhaps the last native stronghold for Yellowstone cutthroat trout. Since the predatory fishes’ discovery, cutthroat trout numbers have plunged as lake trout gobbled up the native fish. The park has spent millions to net and remove lake trout each summer, as well as experimenting with ways to kill eggs at lake trout spawning grounds. The National Park Service estimates more than 3.4 million lake trout have been killed during the netting. As a result, populations of the nonnative fish age 6 and older have declined an estimated 71%.”

Maybe it will snow more this month? Things aren’t looking so hot in the mountains. The snowpack is pretty abysmal and unless something changes fast, we could be in for a very long summer. If the summer is as warm for as long as it was last year, we could see the rivers pf the park extremely shallow, with many small creeks dried up. Last year, the Yellowstone River out of the park was the lowest in memory and the snowpack is not going to allow the flow to recover to a normal level if the temperatures repeat. Things could work out, though. They just better be soon. Sorry this section isn’t a positive one. 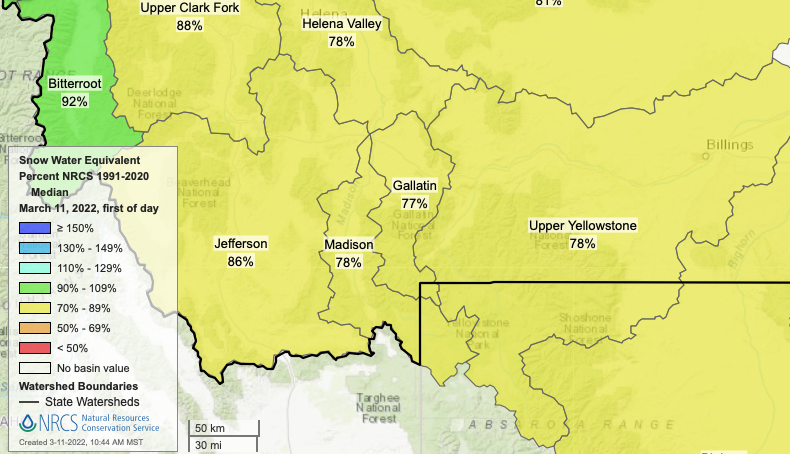 It will be snowing out near Cooke City this week, with accumulations around eight inches total forecasted to fall on Friday, Sunday and Tuesday. A few flurries could fall all week, but the biggest snow event days will be the ones mentioned. Highs will be a little above freezing, while lows could dip to the teens.

Things in Gardiner will be a little warmer, but similar precipitation days. The snowfall total for all three days of snow could be around an inch. It may also rain, as the lows don’t get below 20 all week. If you are staying in Mammoth Hot Springs, expect the weather to be the same as Gardiner, just a couple degree cooler. 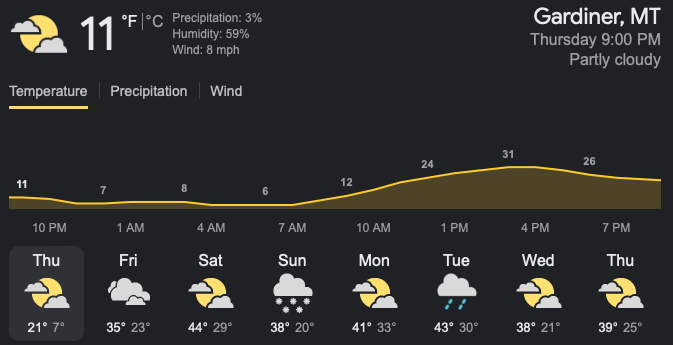 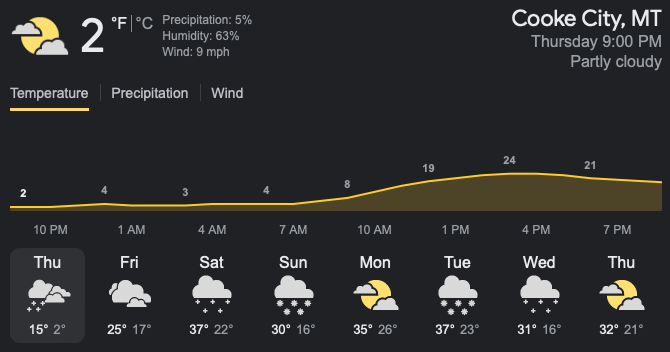 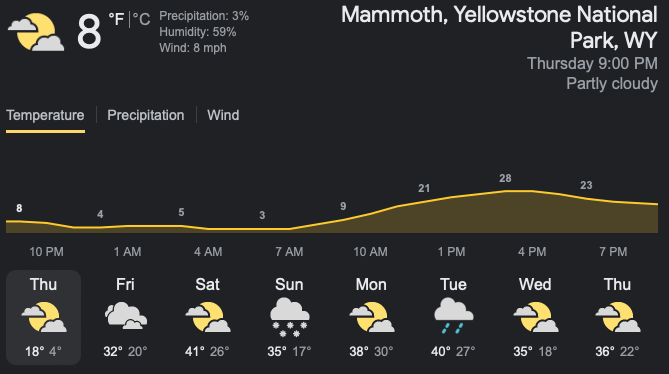 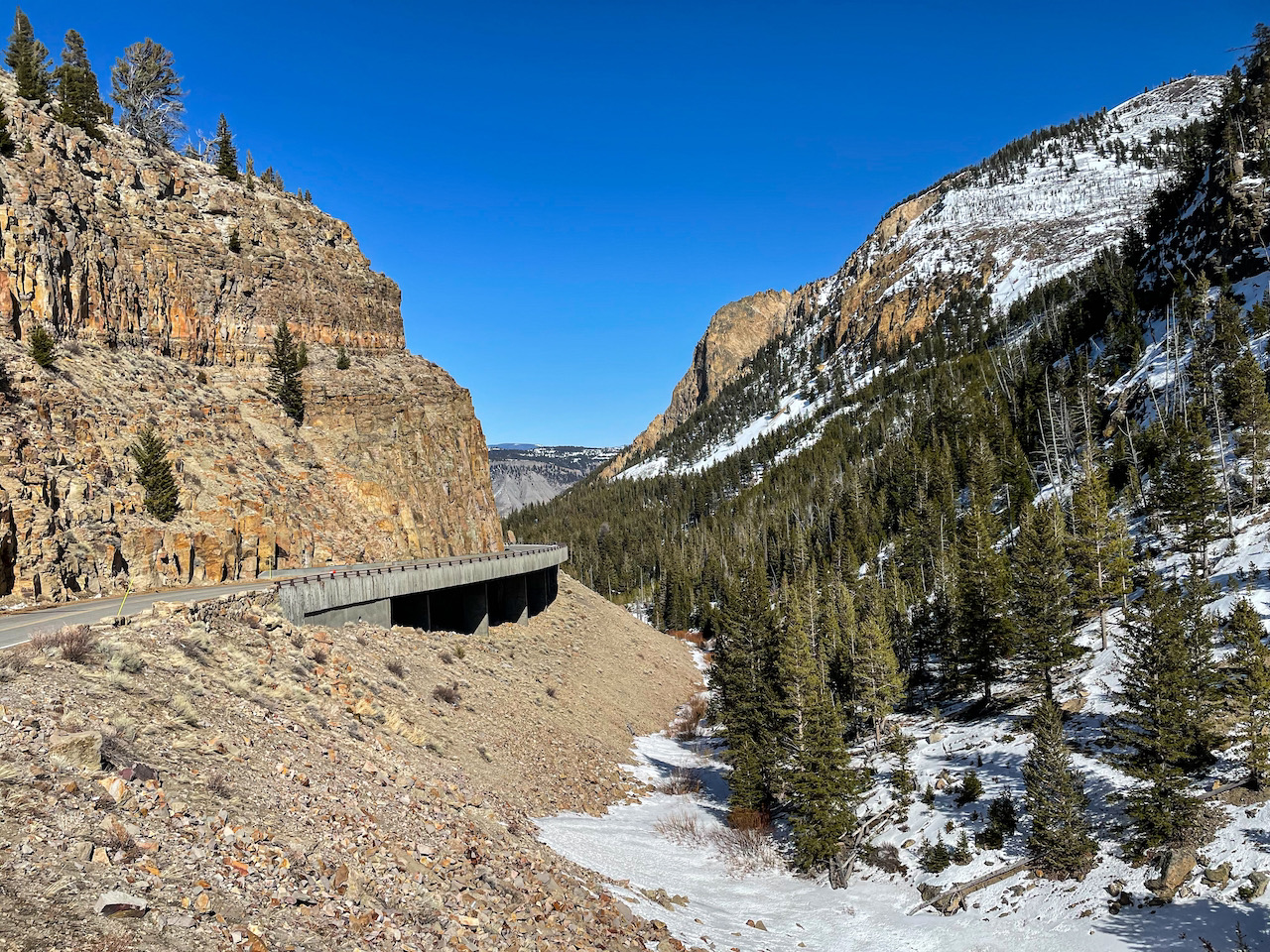 The good news is that the road this week shouldn’t be bad. The further east you go, the better chance of encountering heavier snow on the roads and pockets of ice, but generally, riving should be ok. The bison are using the roads heavily right now to roam around, so watch for them and the cars pulling snowmobiles rushing to and from Cooke City.

Mammoth is still open and not very frequented at all. What a shock. Looks like not very many people are enthused about winter camping. I do expect this to start to change soon, though. In a few weeks, the migratory birds will start to return, as well campers. It won’t happen this week, though. 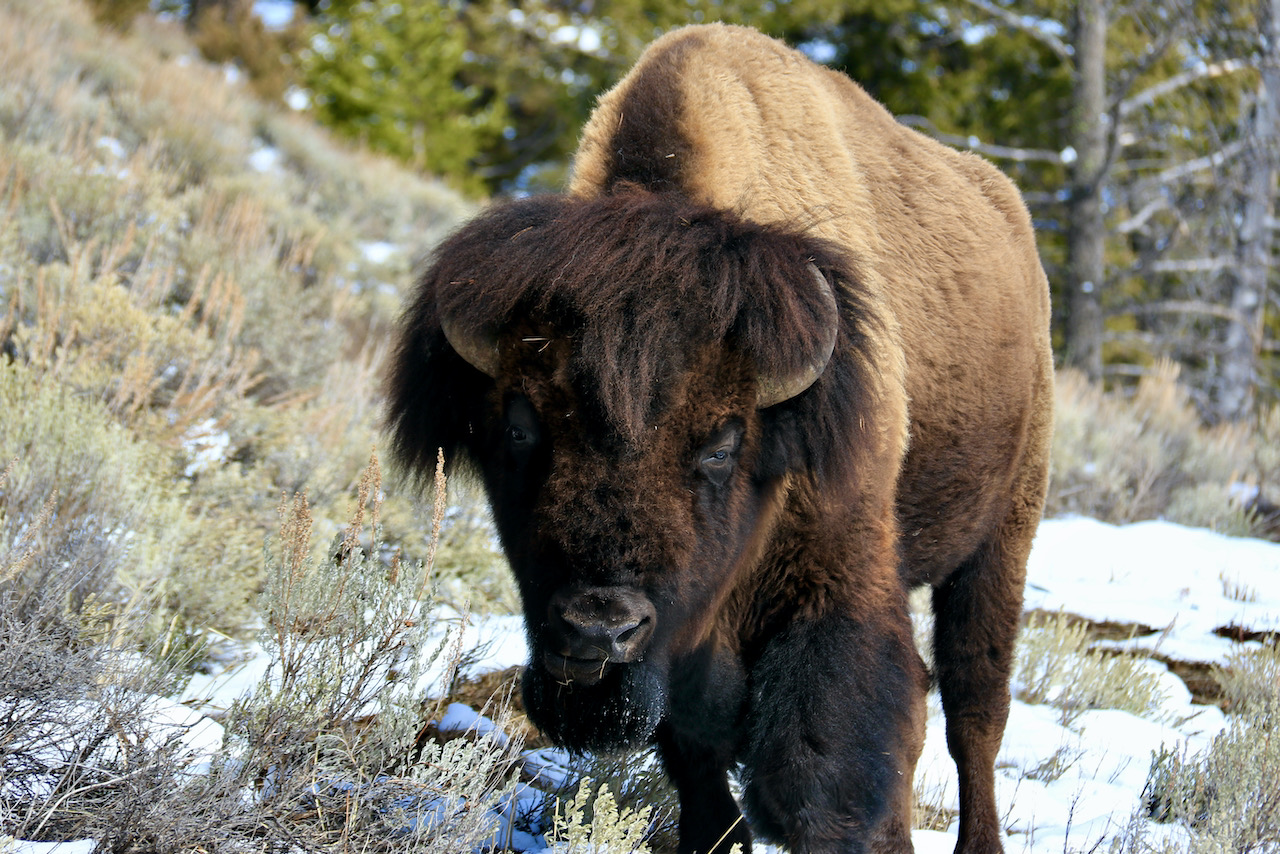 The grizzlies are out and about, bringing another dose of excitement to a a place that is already incredible for wildlife watching. This past week, visitors were rewarded with incredible wolf sightings, a black bear in a den, and, of course, the rare wolverine sighting that I shared about earlier. All of these sightings occurred along the only open road and those who drive back and forth along it were greatly rewarded. I expect this week to be the same, minus the wolverine sighting. I can all but guarantee that you won’t see one of those, or a mountain lion. I could be wrong, and for your sake, I hope I am.

Elsewhere, the bison are roaming around and creating daily traffic jams. The elk are posing on ridge lines and some are holding on to their antlers for a few more weeks or months. Pronghorn are hanging out near the north entrance, and eagles are perching up on trees. The migratory birds have yet to return, but it could happen this week. Definitely keep an eye out for the rocky mountain bluebirds. I tend to start seeing them around this time of the year. 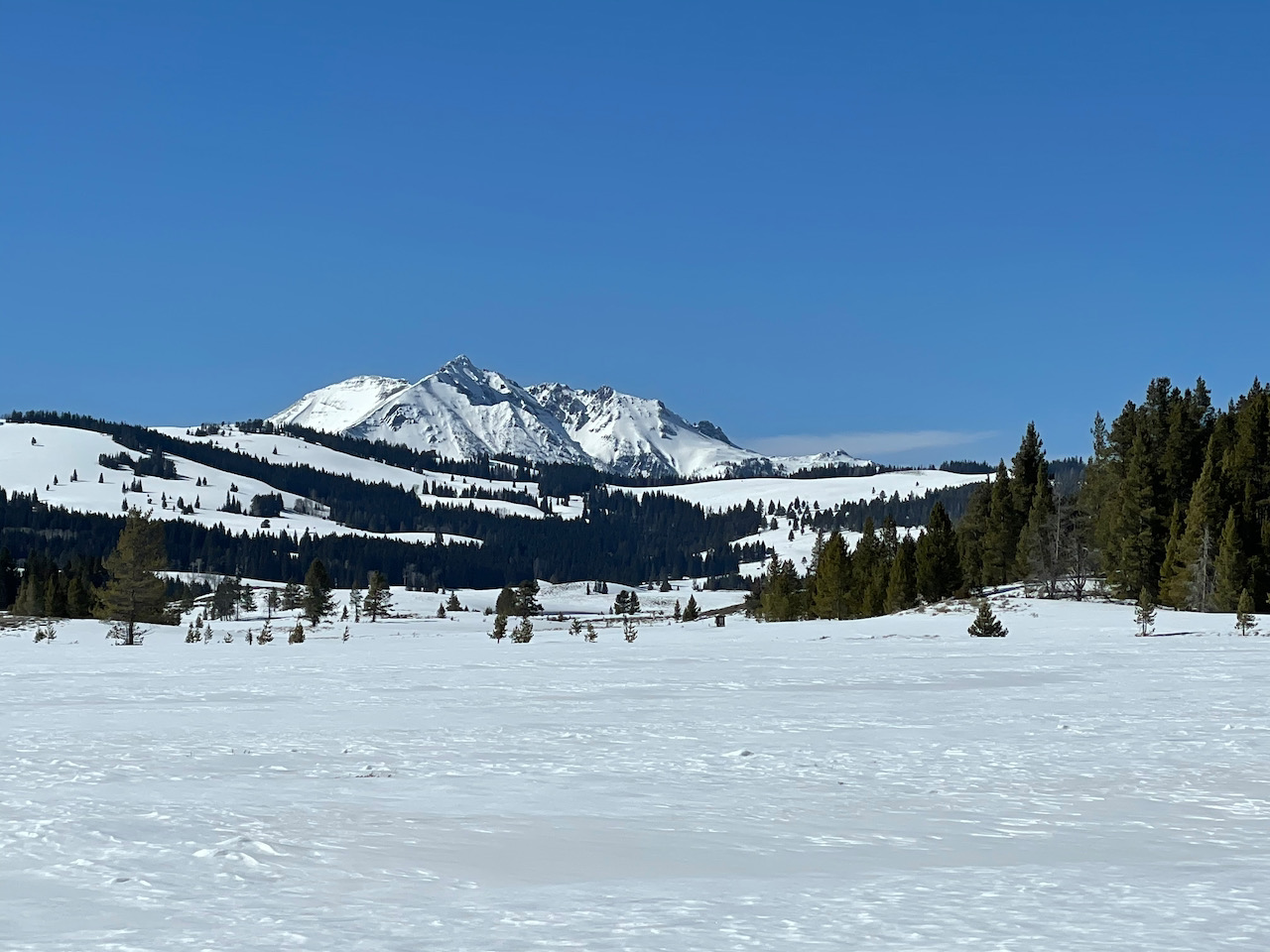 I hesitate recommending this, but seeing as only a handful of readers will take me up on this, I don’t think it will cause too much hard. Obviously, if you do this and a ranger asks you not to, follow their request and thank them for being out and about. It is going to be a long year for them.

One of my favorite things to do this time of year, now that the roads are being plowed and are closed to traffic, is to walk the road up from Mammoth to Swan Lake Flats. There are two trail that lead up there, so if that sounds better, take one of the trails and stay off the road. Just be ready for some deeper snow and more wild conditions.

What makes the trek up the road so great is that if there is snow, it is packed down, making traveling easy. It is also a chance to see a gorgeous stretch of road that can be a little hectic to drive on a busy summer day. On the way up, you’ll pass through the Hoodoos, take in the stunning cliffs on Bunsen Peak, enjoy the slowly thawing view of Rustic Falls, and also be able to gaze and appreciate the engineering marvel of the Golden Gate Stretch of Road. Once you level off at Swan Lake Flats, walk the road as far as you want. The first flat section is 2.5 miles from the parking area at the Upper Terrace at Mammoth.n Swan Lake is 3.7 miles.

I recommend going a little into the flats, as the mountain views become more impressive with every step. A bonus for me and anyone who knows the area well is the glimpse above the flats of the icy and beautiful  Electric Peak. You may see bison up here, but more than likely the place will be devoid of wildlife, giving you an entire valley to yourself. Hard to beat that.

Oh, beware of the headwind going up. It can rip down the canyon. 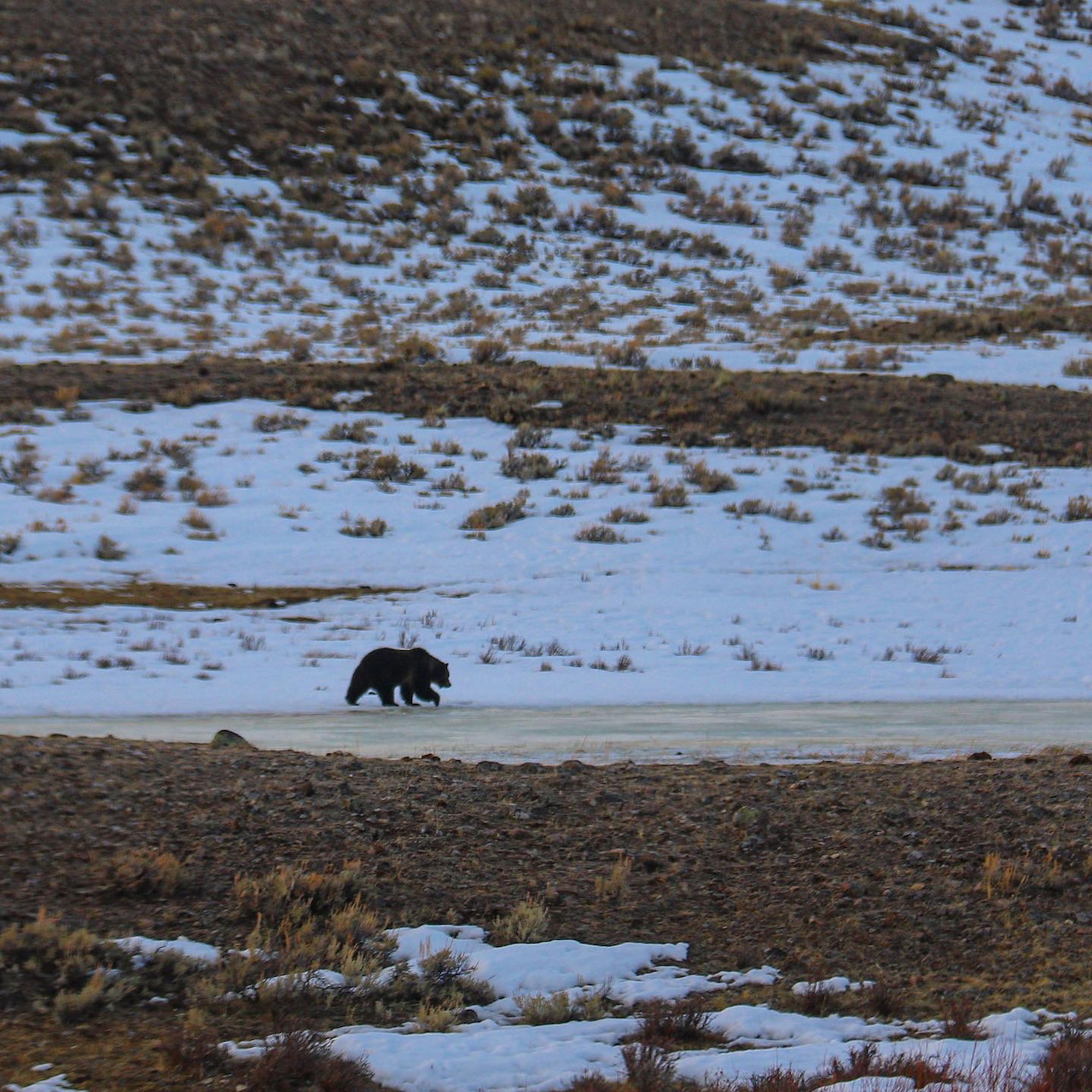 If you are coming to the park and plan to spend your time in the car, in the buildings or at the busy boardwalk trails, you more than likely will not need bear spray. I know I will catch some flack for saying that, but not everyone needs to have bear spray for their park visit. If you want to carry it, definitely do so. I always have it with me and do not want to discourage anyone who wants it with them to do so.

You definitely do need bear spray if you are going to hike on trails. Bears can be seen on every trail in the park. I can almost guarantee they have. I also know that the park will post signs when they can of bears frequenting trails and even going so far as to close the routes if there is a food source for the bear near the trail. Bears can be seen in any corner of the park. You should have a healthy respect for them, but not fear them. Very rarely will they attack, even less frequently will they attack you if you are in a group of three or more. Even in pairs an attack is ridiculously low. If you do have to hike solo, which everyone frowns upon, know that incidents are super low. If you hike solo, also know that walking quietly is not smart at all, so make noise, talk to yourself, or create your own remix to the “Hey bear” mantra we all should be saying.

Ok. The three rules: Carry bear spray at all times. Be confident in your ability to use it. Have it within reach at all times.

That is it. You do those three things and you can confidently walk in bear country. Just continue to be smart, stay loud, avoid kills, and ALWAYS STAY 100 YARDS FROM A BEAR. 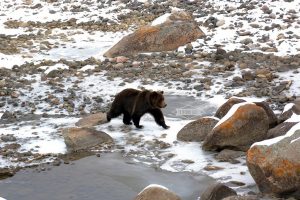 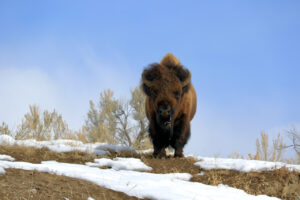 Next post This Week in Yellowstone National Park: March 18th through March 24th, 2022