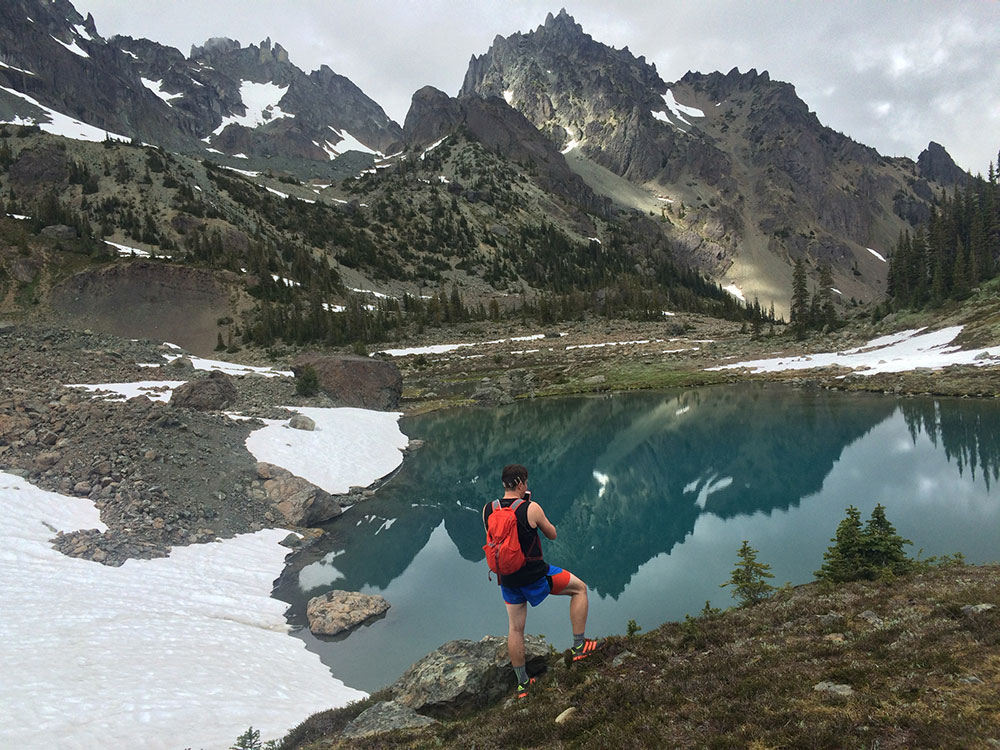 As we near the end of the year, many will celebrate the end of a rough 2016. While it wasn’t an ideal year for many, it was a still a banner year for nature, The Outdoor Society and the hiking community. In a year that celebrated the 100th anniversary of the National Parks, witnessed an election that divided the country and experienced incredible weather events, we saw our greatest year yet. Receiving amazing traffic to the website, fantastic book sale numbers and dozens of stunning trips to the best scenic wonderlands in the West, 2016 was a good year for The Outdoor Society. We thank you all for your support and have even more amazing things planned in 2017.

In 2016, articles written by Outdoor Society staff were featured on Osprey backpack’s website, as well as features for Marmot, Patagonia, Gerber, Wild Olympics and numerous other print and online publications. Most were written by Douglas Scott, who is becoming known as the leading voice for outdoor recreation and environmentalism on the Olympic Peninsula. Mathias also had articles appear all over, helping lead the debate about the use of huts and gondolas around the Pacific Northwest. We attended conferences, gave talks and tried our best to get as many people out into nature as we could. We were everywhere, breaking news stories, writing incredibly popular posts and helping lead hundreds of thousands of people outdoors to reconnect with nature. For the year, The Outdoor Society had over half a million views, averaging over 1,300 unique page views a day. Not too shabby for a couple of guys who happen to love writing, photography, nature and web design. Our top 10 posts of 2016 generated over a quarter million views (276,181) and helped educate and inspire countless trips into America’s most-favorite lands. While some of our favorite articles are not included, this top 10 list is a nice reintroduction to our work and yet another reason to visit us frequently in 2017.

The End of the Vance Creek Bridge

Published on August 28th, 2016, this was our most popular post of the year. The Vance Creek Bridge is a local favorite, gaining incredible popularity thanks to Instagram. Known online as #ThatPNWBridge, the area that was once a place for locals became a destination for people from around the world. Spanning 422 feet across and towering 347 feet above the creek below, walking along this bridge is exhilarating, scary and somewhat dangerous. Originally built in 1929, the Vance Creek Bridge helped timber companies gain access to some of the best logging in America. Towering old growth forests once stood on the other side of the steep hills of the southern Olympic Peninsula and the bridge allowed for quick work of the once pristine forests. Once the logging industry started declining in the 1970’s, the bridge was abandoned and mostly forgotten about until 2012.

One of our first stories of 2016 was our second most popular. From January 1st, 2016 through January 4th, 2016, there were 2,413 earthquakes in the Salish Sea region of the Pacific Northwest. Even more amazing is that since Christmas Day, nearly 8,000 small quakes have hit Vancouver Island, the Salish Sea and the Olympic Peninsula of Washington State. As the major media around the PNW started freaking out, we called the USGS. We learned that the earthquakes were part of a slow slip. The Slow Slip Episodes and Swarms are actually quite common in the region. Around Southern British Columbia and Northern Washington State, they have been occurring every 14 months or so since at least the 1990s.

Our third most-popular article of 2016 helped thousands of visitors to Olympic National Park find the perfect place to pitch a tent in the front country. In America’s most diverse National Park, everyone interested in camping was able to find what they were looking for in Washington State’s most popular National Park. With 15 incredible options, we helped give yet one more reason to fall in love with the wilderness and beauty of Olympic. This article had to be updated a few times, as the Elwha campgrounds ended up vanishing or being closed for all of 2016.

Number four on our list for 2016 was our post that helped thousands of visitors to Olympic find the ultimate backpacking experience. With 611 miles of trails in the park, and nearly one million acres of wilderness to explore, backpacking in Olympic National Park gets you up close and personal to one of the worlds last remain wild areas. From rugged, glaciated peaks, to isolated set-stacks on rugged coastlines, the only American rainforests, high alpine lakes and amazing waterfalls, the trails in the backcountry of Olympic lead to some of the best destinations in the world.

Number five is our article that helped announce that the Washington Cascade’s most famous “ghost town” would be reopening for hikers and backpackers to explore. On March 8th, 2016, the US Forest Service announced that the trail and site of the old mining town will be reopened to the public by the end of May. Located along the South Fork of the Sauk River, Monte Cristo was closed to the public to remove hazardous toxic minerals left behind from the mining boom that occurred in this region over a century ago. While the buildings are derelict, Monte Cristo is a great family destination to explore the beauty of the Cascades and the history of the region.

There is nowhere on earth as stunning, remote and breathtaking as the wilderness coast of Olympic National Park. Our 6th most-popular post in 2016 highlighted seven beaches that will change your life and your perception of the Washington Coast. Best seen during low tide, the Washington Coast’s Olympic beaches give those who make the drive west access to some of the wildest and most beautiful beaches in the world. These beaches are not for sunbathing, but for exploring tide pools, beach combing, backpacking, and hiking along the Pacific Ocean. Home to awesome sunsets, incredible history and hidden secrets, making the Olympic Coast your weekend or vacation destination is one of the best choices you can make. Don’t believe me, discover our seven amazing locations!

Our seventh most-popular position 2016 was an in-depth description of the Staircase Loop Trail in Olympic National Park. After seeing a level of competition in the hiking community, I decided to return to my roots and start embracing the easy and often overlooked hikes in the region. I found that sometimes, we lose track that each region of Olympic National Park has an easy, amazing trail that would be the main attraction in any other National Park. Local hikers tend to take them for granted, and yet, we continue to find ourselves drawn to them, returning numerous times each year. For some, it is Hurricane Hill, for others it is the Hoh trails or Sol Duc Falls. For me, it was and still is the Staircase Loop Trail.

In honor of the National Park Service turning 100 years old, on August 25th, 2016, we posted images of Olympic National Park from space. In this post, I had to share pictures that showed off of a view of Olympic National Park that I had never seen. From high above the atmosphere on the International Space Station, Astronaut Jeff Williams shared both images and a video of America’s most-diverse National Park. From high above, the rainforest-lined river valley show off a stunning green, while the Olympic Mountains look perfect, pristine and as wild as they are. I don’t often need to wipe drool from the corner of my mouth while looking at pictures of my backyard, but these pictures truly are beautiful, inspiring and breathtaking.

Yet another article written in 2015, our ninth most-popular story featured nine hikes that lead to beauty and majesty of Mount Rainier National Park. Mount Rainier Park tends to get overlooked by everyone, which is a funny thing to say about a volcano rising over 14,409 feet above sea level. Mount Rainier is one of the most visible and iconic mountains in North America, and is located 54 miles from the city of Seattle, which sits just above sea level. Each year, Mount Rainier has tens of millions of eyes gaze upon the glaciated summit during the sunny days, when locals say “the Mountain is out.” Everyone who lives near the mountain knows its shape by memory, and yet, few travel to this National Park and mountain. In this post, we helped people discover the best hikes in and around this iconic volcanic National Park.

Finally, our top 10 list ends with a death in Yellowstone. This was a wild year in Yellowstone National Park, with tourists putting bison in cars and walking on hot springs. In this article, we focused on the story of a man who walked off trail in the Norris Geyser Basin. On Tuesday, June 7th, Yellowstone National Park officials responded to a call about a tourist incident at the Norris Geyser Basin region of the park. As this is being written, park staff are working to retrieve the body of the individual who reportedly left the boardwalk in the geyser and hot springs area.  The hot springs that the body was in is said to be .13 miles from the boardwalk. The body dissolved in the hot springs and was never recovered.

BUY OUR GUIDEBOOKS AND CALENDARS!! 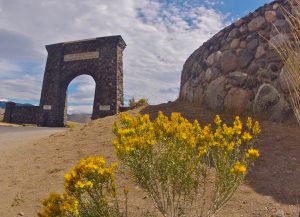 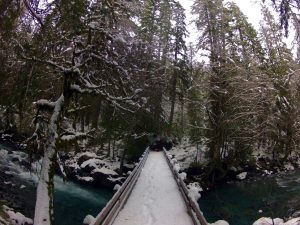 Next post Olympic Inspiration: Winter on the Dosewallips River